Thanks to a handful of major deals valued at over $1 billion, 2019 saw the largest overall M&A spend in the upstream sector over the past five years for Latin American assets.

This is according to the latest report from Evaluate Energy, the Daily Oil Bulletin and Sproule.

The report, entitled Latin America: 2019 Upstream M&A and Drilling Activity Review, provides a detailed overview of the key M&A trends and drilling activity in Latin America in recent years. It is available to download here. 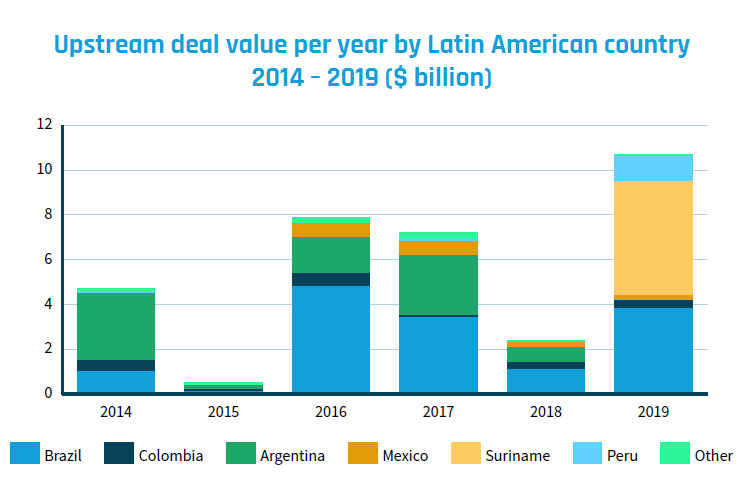 The two largest deals took place in Suriname and Brazil – the details of each deal are provided below.

As the chart above shows, this one deal for $5.1 billion pushed Suriname into third place when ranking each Latin American nation by upstream M&A activity in US$ since 2014. The deal itself was a farm-in arrangement that sees Total join Apache Corp. in Block 58.
Total will gain a 50% interest in the block, with the consideration made up of a $100 million upfront cash payment and a cost-carry where Total will pay $5 billion of Apache’s development costs for the first $15 billion of development expenditure. The deal includes a bonus due to Apache on first oil, as well as royalties and ongoing cost carries if costs escalate further.

Brazil is still Latin America’s leading nation over the five-year period covered in the report, with over $14 billion in new upstream deals agreed since the start of 2014.

State-company Petrobras has played a pivotal role in this total, especially in the past 12 months. The company agreed 10 individual asset sales last year for a total of $3.5 billion in 2019 alone. The largest of its 2019 deals was this $1.29 billion sale to Petronas, where the Malaysian company acquired non-operated interests in the Tartaruga Verde field and Module III of the Espadarte field.

More on each deal, as well as details on 2019’s other +$1 billion deal that was agreed with Peru, can be found in the report.

Also included in the report: