Active hedgers among the TSX-listed oil and gas producers covered 63% of their combined natural gas production – and 48% of combined oil production – with a range of hedging contracts in Q1 2017.

Data from CanOils’ updated hedging contracts module shows that, in Q1 2017, there were 42 TSX-listed companies with hedging contracts covering more than 10% of their oil and gas production portfolios. These companies eventually produced 1.1 million boe/d of oil and natural gas liquids (NGLs) and 6.3 bcf/d of natural gas between them during this period.

See: Why do oil and gas companies hedge?

“Gas producers appeared to be more cautious in their approach to commodity pricing than oil producers, using hedging contracts to cover a greater volume overall and a far greater percentage of their total output during the first quarter,” said Isabelle Li, senior financial analyst for Canoils. “Gas prices have been lower for far longer than oil prices, so this caution is perhaps to be expected.” 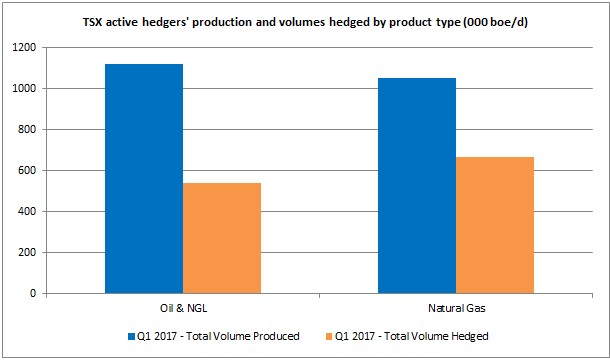 This apparent caution may be one reason behind the type of hedging contract that was most prevalent among the gas producing peer group.

There are many different types of hedging contracts related to commodity pricing in place for TSX companies according to CanOils, but for the purposes of this article, they have been classified into three main categories:

CanOils’ hedging data shows that at the start of Q1 2017 among the TSX’s active hedgers, gas producers were covered by far more swap deals than any other type of contract. 73% (or 491,000 boe/d) of all gas production that was hedged in Q1 2017 was hedged in a swap deal.

While caution or a greater need for cash flow certainty – depending on how you look at it – is likely one reason behind this, it could also be that collars or other contract types were simply either not available or less attractive cost-wise for natural gas this quarter. “Swaps are also simpler than other contract types,” adds Li. 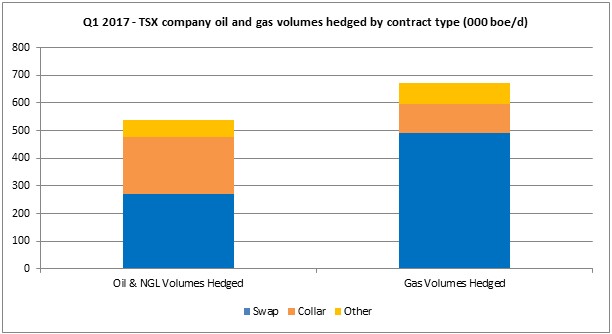 Swaps were also the most common oil contract too, but only 50% (269,000 boe/d) of all oil hedged by TSX companies in Q1 2017 was under a swap deal, with collars and three-way collars relatively more popular for oil producers.

This relative increase in popularity could be down to the fact that oil prices have fluctuated to a far higher degree than gas prices in recent times. No doubt oil producers were eager to enjoy at least some of the upside of any sustained price increase that this fluctuation may yield, despite the slightly increased risk to their cash flow positions.