Successful bid rounds in Mexico and Brazil during Q1 secured $3.1 billion in cash – a huge step forward for both countries in securing global interest in offshore development.

Brazil 15th bid round in March was responsible for 79% of this value, with huge individual bids from ExxonMobil, Petrobras and Norway’s Statoil. Mexico’s deepwater Round 2.4 (January) and shallow water Round 3.1 (March) drew $649 million in cash bids combined.

A new report released by Evaluate Energy, Sproule and the Daily Oil Bulletin shows that while Brazil’s round drew larger cash bids, significant changes within Mexico’s oil and gas market are having a profound impact: 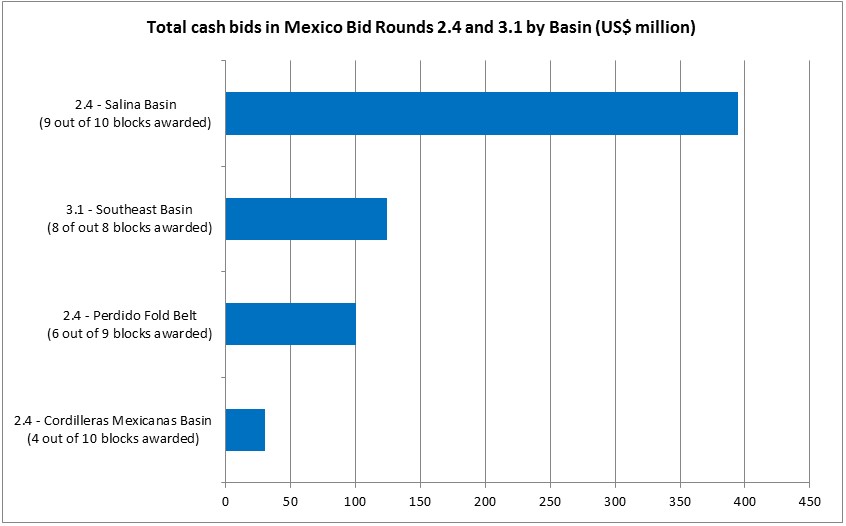 The main goals of Mexico’s energy reforms, which were instigated in 2013 and are detailed within the report, have been to inject competition into the upstream sector. It cannot be denied that this has been achieved so far.

The changes are also reshaping how Pemex, which has previously monopolised activity, operates within this altered marketplace. For sure, the company is still winning blocks ¬– four new blocks in Round 2.4, and seven new blocks in Round 3.1. But of the 11 blocks won by Pemex, nine were as part of a consortium and six were won by defeating a rival bid.

Full results and analysis of the key awards in all three rounds is available in the report, which can be downloaded here.