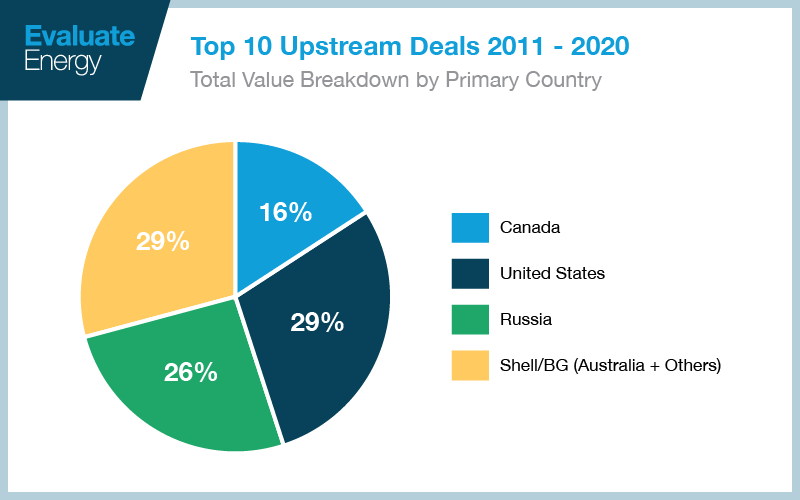 Three Canadian upstream M&A deals rank in the 10 largest E&P transactions by acquisition value around the world in the past decade, according to new data from Evaluate Energy.

U.S., Russian deals also appear prominently alongside the largest deal of the decade, Shell’s acquisition of BG that included assets from all over the world.

“Despite 2020 being a down year for many in the upstream space to say the least, it was also interesting to see a couple of 2020’s corporate mergers in the United States break into the top 10,” said Eoin Coyne, senior M&A Analyst at Evaluate Energy. “ConocoPhillips’ – who make the list as both an acquirer and a target in two separate high value deals – and Chevron’s recent mergers with Concho Resources and Noble Energy, respectively, were the deals that made the cut.

Canada’s three deals made up 16% of the combined $296 billion value of all 10 deals. CNOOC Ltd.’s acquisition of Nexen in 2012 is the largest Canadian deal over the past 10 years. At a value of ~US$18 billion, this deal ranks fourth in total value on a global scale.

The full list of the top 10 deals, which includes data on acquisition costs, details on how much equity was involved in the deal and how the value of that equity increased or decreased between announcement and deal completion, can be downloaded here.

Evaluate Energy is headquartered in London and specializes in global oil, gas and renewable energy intelligence.