The major Cdn$32.1 billion in oilsands mining deals that were announced in March dominated Canadian M&A activity during the first seven months of 2017, as they comprised 87% of the overall value of transactions. But it’s important we don’t allow this to skew the significance of other deals agreed and completed this year. 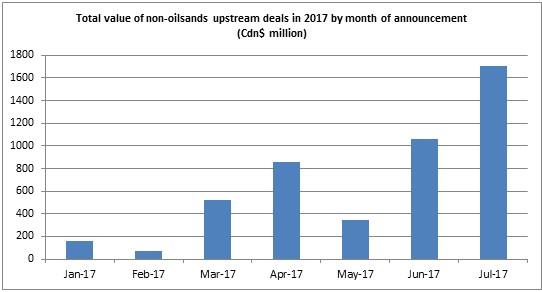 New analysis in CanOils’ latest M&A report illustrates that upstream activity picked up in terms of overall deal values throughout Q2, but the actual number of deals dropped off in June. After the second quarter ended, even though the number of new deals stayed flat, July saw three of Canada’s largest deals outside of the oilsands sector to boost deal totals.

Below are the top 10 upstream deals in Canada this year so far, away from the four huge deals in the oilsands mining sector, according to CanOils M&A data.

For more on each individual deal, download the relevant monthly M&A review at the link provided.

The company to agree the largest single sale of 2016 has also agreed the largest non-oilsands acquisition of 2017 so far. Paramount Resources Ltd. (TSX:POU), a company that made headlines with its Cdn$1.9 billion sale of western Canadian assets to Seven Generations Energy Ltd. (TSX:VII) last year, agreed a deal for over Cdn$850 billion for the 85% stake in Trilogy Energy Corp. (TSX:TET) it did not already own. The deal will see Paramount issue Trilogy shareholders with around Cdn$455 million in Paramount stock, while the rest of the consideration is made up of Trilogy debt to be assumed, according to Trilogy’s balance sheet in Q2 2017.

For more on the largest non-oilsands deal of 2017 so far, download the NEW CanOils M&A Review for July 2017.

This deal was a completely international affair, with the UK’s Centrica Plc (LSE:CNA) and Qatar Petroleum deciding to sell their respective 60% and 40% interests in the CQ Energy Canada Partnership to a consortium led by Chinese-backed MIE Holdings Corp. The deal will see the selling parties receive a share of Cdn$722 million proportionate to their ownership stake in the partnership. Centrica, having sold its interests in Trinidad and Tobago in a US$30 million deal to Royal Dutch Shell (LSE:RDSA), has now switched its E&P focus entirely to Europe, and this week signed a new joint venture agreement with Bayerngas Norge.

For more on the sale of the CQ Energy Canada Partnership, download the CanOils M&A Review for June 2017.

The largest deal to involve a Canadian-headquartered company outside of the oilsands sector this year so far saw Waterous Energy Fund become the largest single stakeholder in Northern Blizzard Resources Inc. (TSX:NBZ). Since this deal completed in May, Northern Blizzard has changed its name to Cona Resources Ltd. and is now listed under the ticker “CONA” on the TSX. Waterous acquired its 67% majority stake for Cdn$244 million in cash and Northern Blizzard’s net debt position was Cdn$223 million in Q1 2017, net to this 67% stake. The company produced just over 11,500 boe/d net to Waterous’ position in Q1, representing a cost of Cdn$40,400 per flowing barrel.

For more detail on this deal, download our M&A reports for April and May 2017.

Paramount’s other huge deal this year was unveiled in the same press announcement as the Trilogy purchase. Paramount will be acquiring the remaining Canadian assets held by Apache Corp. (NYSE:APA) for Cdn$460 million. Unlike the Trilogy deal, no debt will be assumed and Paramount will fulfil the consideration using cash on hand rather than issuing stock.

For more on Paramount’s acquisition of Apache’s assets, download our M&A report for July 2017

Before the larger deal with Paramount was agreed, Apache had already agreed a Cdn$300 million deal with Cardinal Energy Ltd. (TSX:CJ) to sell light oil assets in the Weyburn/Midale area of southeast Saskatchewan and the House Mountain area of Alberta. This deal saw Cardinal’s production boosted by 5,000 boe/d, while light oil now makes up a much larger proportion of the company’s portfolio at 45% compared to medium oil output.

For more on this deal, download the CanOils M&A Review for June 2017.

Pengrowth Energy Corp. (TSX:PGF) has been arguably the busiest seller during the first two quarters. Its Cdn$300 million deal in early July is the largest and most recent of the company’s divestitures so far in 2017 and reduces Pengrowth’s predicted 2017 production by just under 14,000 boe/d at a cost of Cdn$21,600 per flowing barrel.

For more on Pengrowth’s 2017 divestitures and its success in strengthening its balance sheet, download our M&A report for July 2017

Painted Pony Petroleum Ltd. (TSX:PPY) completed its acquisition of UGR Blair Creek Ltd. in May from Unconventional Resources Canada LP (“URC”). The deal consideration of Cdn$294 million included Cdn$48 million in net debt assumption and was otherwise satisfied via the issuance of 41 million new Painted Pony shares to URC. Painted Pony now anticipates its 2017 annual average daily production to increase by 12% and also expects to exit 2017 with production of over 73,000 boe/d.

For more on this deal, download our M&A review for March and May 2017.

The only deal in this list to be announced in the relatively barren first two months of 2017. At the time, the consideration was unknown, but in March, it was confirmed that the company now known as West Lake Energy Ltd. had acquired the assets of the insolvent Twin Butte Energy Ltd. for around Cdn$201 million. Before being forced into receivership by its banking syndicate last September, Twin Butte had medium and heavy oil production of approximately 12,700 boe/d in east-central Alberta and southwestern Saskatchewan.

For more details on this deal (before a consideration was confirmed), download our January 2017 M&A review.

This was actually the second deal that Pengrowth Energy agreed in the Swan Hills area of north central Alberta this year, but the first of those deals has since been cancelled due to issues faced by the acquiring party in securing finance. This second deal, originally announced in April, saw Pengrowth part with 5,150 boe/d of oil-weighted production at a cost per flowing barrel of just under Cdn$36,000. In July, Pengrowth stated that it had agreed deals that helped the company reduce its net debt position by 66% and only saw proved and probable reserves decrease by 16%.

For more on this deal in Swan Hills, download our April 2017 M&A review.

Paramount preceded its two huge July acquisitions by making a Cdn$150 million asset sale in the Valhalla area of Alberta in May. The buyer was not named and Paramount did not divulge a specific rationale for the agreement. The divested assets comprise of 74 net sections of land and produced 1,400 boe/d in Q1 2017, representing a cost of over Cdn$100,000 per boe to the acquirer.