Canadian oil and gas companies have recorded major losses as a group for the 3 month period ending September 30, 2015, according to new analysis of quarterly data by CanOils. Low commodity prices have continued to have a huge impact on income statements for oil and gas companies since the end of 2014, with margins being squeezed and huge impairments being recorded across the board. This analysis from CanOils shows that Canadian companies are feeling the same effects as their counterparts across the border in the U.S., whose earnings were analysed using Evaluate Energy data recently.

In this report, CanOils has used Q3 2015 data from the income statements of 34 TSX and TSX-V companies (“the group”) that produce mainly in Canada and have production between 5,000 boe/d and 200,000 boe/d. The full list of companies is available here. In total, these companies produced 1.29 million boe/d in Q3 2015.

The losses for these companies were far greater this quarter compared to previous periods. In Q2 2015, the group made a combined net loss of Cdn$596.5 million but, three months on, this had slumped to a staggering Cdn$3.64 billion loss. 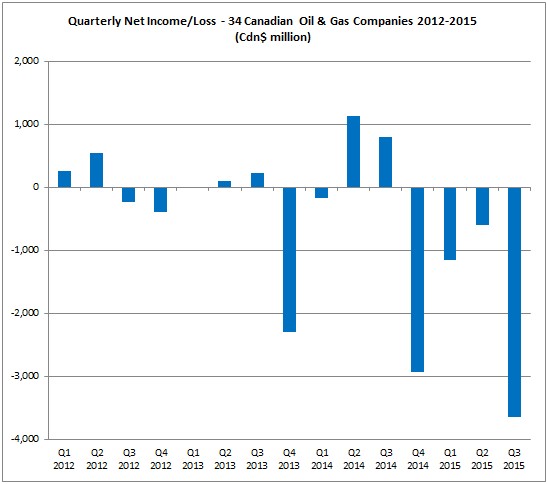 The big reason for the steep drops in Q4 2013, Q4 2014 and Q3 2015 is that this is when the companies recorded impairments – Canadian-listed companies are required by IFRS to assess their assets for impairments either once per year at year-end or following the discovery of an indicator of impairment. Only a handful of the group of companies recorded any impairment outside of these three quarters. 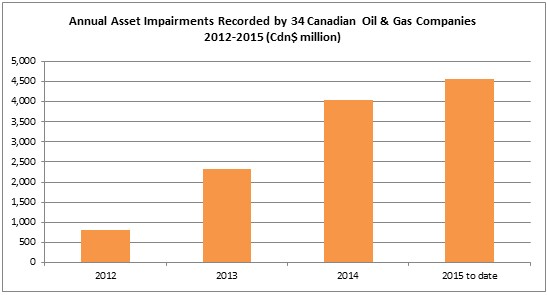 On an individual company basis, the biggest asset impairments of 2015 to date have been recorded by Penn West Petroleum Ltd. (TSX:PWT), with a total of Cdn$834 million. Penn West’s impairments relate to its properties that are being sold in the Weyburn area of southeast Saskatchewan and the Mitsue area of central Alberta as well as certain non-core properties in the Fort St. John area of northeastern British Columbia and in the Swan Hills and Wainwright areas of Alberta.

The company has been pressing on with major asset sale plans over the past few months, along with another of the companies to have recorded 2015’s biggest impairments, Pengrowth Energy Corporation (TSX:PGF). Pengrowth has recorded Cdn$409 million of asset impairments in 2015 (see note 3) so far and put assets producing 13,000 boe/d up for sale in October, as it tries to reach its 2015 divestiture target of Cdn$600 million by year end to help reduce its debt. The most recently agreed and planned sales of assets by both Penn West and Pengrowth are analysed in detail in CanOils’ new report, “Canadian Upstream M&A Heats Up in October 2015.” 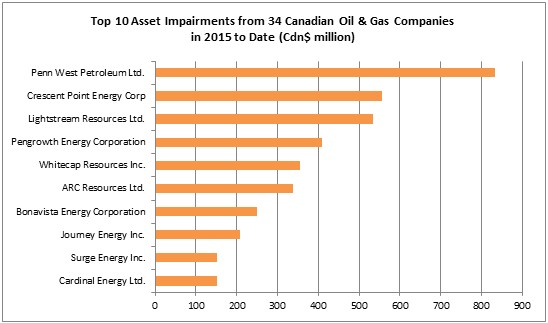 All data in this report was created using the CanOils database, which holds over 10 years of oil and gas financial and operating data for TSX and TSX-V listed companies. CanOils also now has a comprehensive wells and land database covering all of Western Canada, CanOils Assets, which has just gone through a major upgrade process, find out more here.

1) Net income/Loss here refers to post-tax net earnings on the 34 companies’ income statements; the figures have not been adjusted for non-recurring items such as impairments, gains or losses on asset sales or unrealised gains or losses on hedging contracts.

3) Pengrowth also recorded a goodwill impairment of Cdn$73 million in Q3 2015, which is not included in the Cdn$409 million total mentioned here.

4) The 34 companies were chosen as they had all reported preliminary results by the morning of November 12, 2015 (UK time) and were all domestic, non-oilsands Canadian producers with production between 5,000 boe/d and 200,000 boe/d. The full list is available here. 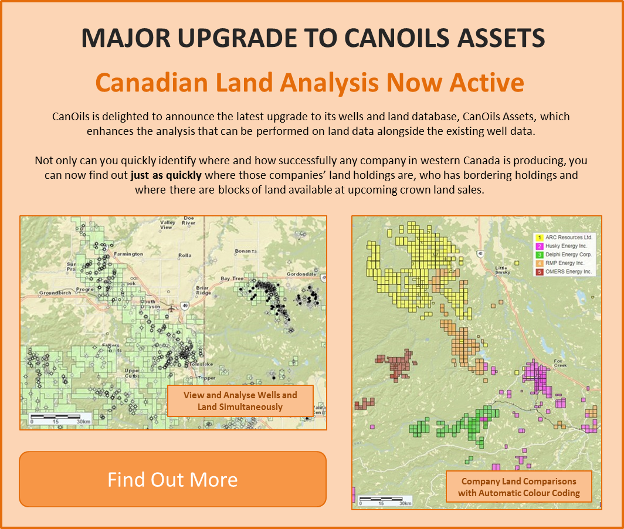