In June 2016, the total value of announced M&A deals in the Canadian E&P sector totalled Cdn$2.7 billion, according to CanOils’ new report that looks at all upstream deals involving Canadian E&P companies in June. This resurgence in value comes on the back of an upward trending WTI oil price that surpassed US$50 per barrel during the month.

Despite the fact that June saw Canada’s biggest upstream deal in the first six months of 2016, the overall deal value of Cdn$2.7 billion was widely dispersed; there were seven deals during the month for over Cdn$100 million in value. For context, the last time this number was reached during a calendar month was in September 2014, which was a time before OPEC stopped supporting the oil price and oil was trading for over US$90 per barrel. 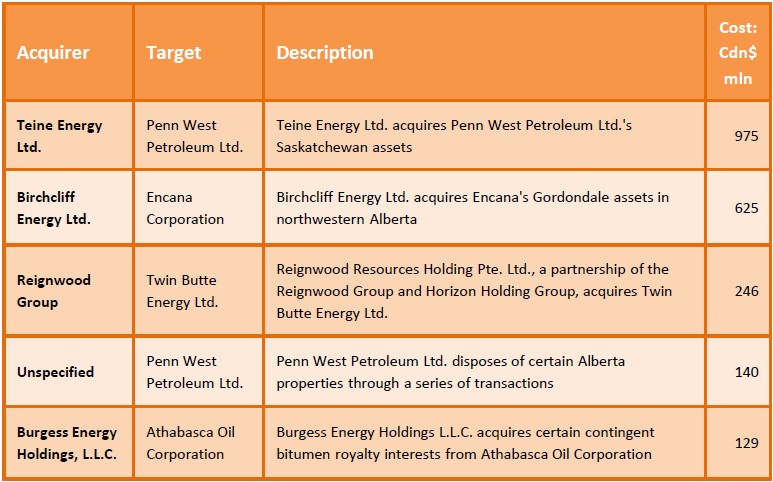 Penn West Petroleum Ltd.’s (TSX:PWT) sale in Saskatchewan was the biggest deal to be agreed for Canadian assets in the first six months of 2016 and was a continuation of the trend of private equity backed companies making large acquisitions in recent times. Teine Energy Ltd, the acquirer in the deal, is funding the deal through its own credit facilities and also through significant backing from the Canada Pension Plan Investment Board.

Encana’s (TSX:ECA) deal to sell some northwestern Alberta assets follows two major asset sales by the company in the U.S. as the company looks to streamline its portfolio, while Athabasca Oil Corp. (TSX:ATH) fresh off closing its merger in the Duvernay and Montney shale plays with Murphy Oil Corp. (NYSE:MUR) last month, has become the latest of many Canadian E&P companies to make a royalty sale.

Full analysis of all the deals listed here and every other deal story involving a Canadian E&P company in June 2016 is available in the report, along with a detailed look at every asset put up for sale in a public listing.