Equinor, OMV and Eni joined the ranks of the world’s major producers this week to announce a cut in their capital spending budgets for 2020, in the wake of the oil price crash and the COVID-19 pandemic.

These European producers, according to Evaluate Energy guidance data, are joining a host of North American majors that have enacted similar budget cut plans for the coming year.

Below these have been combined with some selected budget cuts announced this month by major U.S. upstream players. 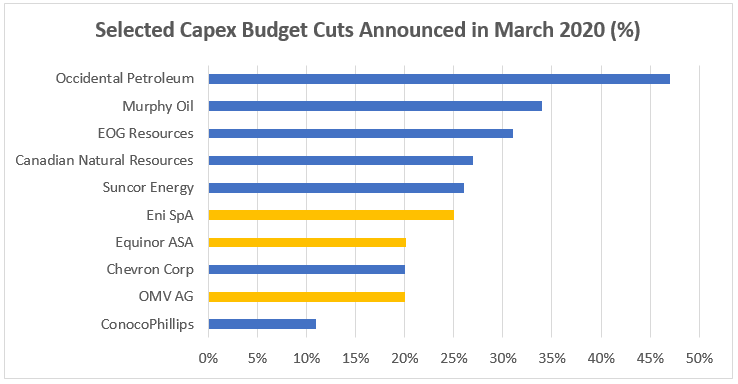 Evaluate Energy’s guidance tool is vital for keeping up to date with every North American budget cut or guidance announcement, find out more here.

These cuts are all, of course, in the wake of the oil price crash destroying margins worldwide and demand for oil taking a similar nosedive in the wake of COVID-19, what with latest figures suggesting that a quarter of the world’s population is now on lockdown and/or working from home. IEA is expecting global oil demand is expected to fall year-on-year, which would be the first time this had happened since 2009.

Clearly the upstream industry is facing major challenges and identifying the companies most likely to ride out the storm is vital for investors.

Evaluate Energy’s hedging database works hand in hand with our robust financial and operating database and our guidance product to help you pinpoint those companies that are best protected against this recent onslaught of outside market pressures.

NOTE (April 1, 2020): After this article was posted, BP also announced budget adjustments in response to the COVID-19 crisis. For more on BP’s 25% reduction in spending plans for next year, BP’s full press release can be seen here.