According to new data in CanOils’ latest M&A review for October 2017, M&A deals involving Cenovus Energy Inc. as either the acquirer or selling party have accounted for half of all upstream deal activity in Canada between January and October.

The company has dominated the M&A landscape in Canada this year and October was no different. The new CanOils report – available to download here – analyses every Canadian upstream deal in October and focuses on Cenovus’s sale of its Palliser area assets to Torxen Energy and Schlumberger. At C$1.3 billion, this deal accounted for 81 per cent of the total C$1.6 billion M&A spend in the Canadian upstream sector in October.

In total, Cenovus has now been involved, as either the acquirer or selling party, in around C$20.5 billion of Canadian upstream deals this year up to the end of October. That equates to half of the entire upstream M&A spend in Canada in the same timeframe. 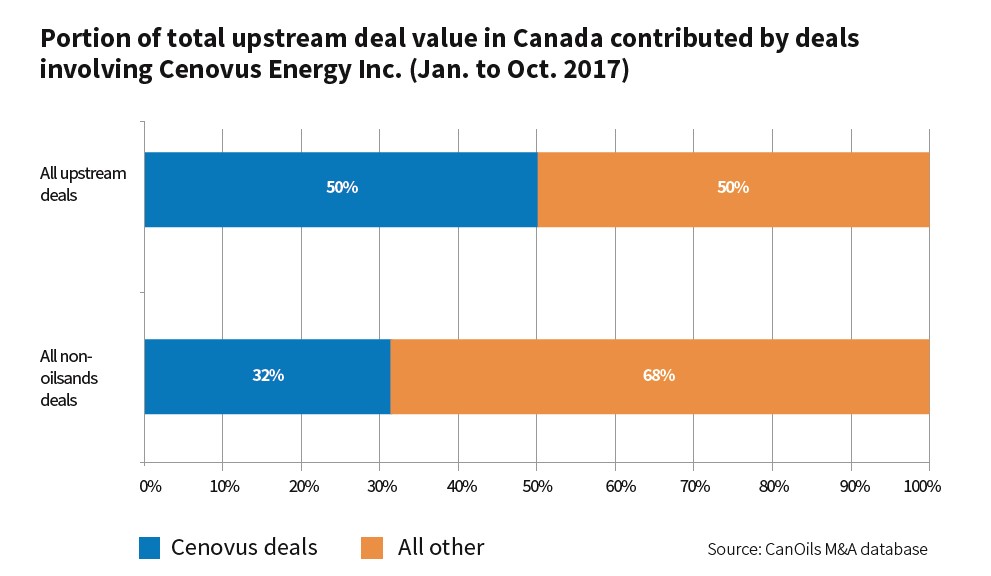 By the end of November, these percentages will undoubtedly increase, given the company’s most recent agreement with Whitecap Resources to part with its Weyburn unit in Saskatchewan for C$940 million.

Away from Cenovus, October did see a number of other significant deals complete. Hong Kong’s MIE Holdings Corp. completed its acquisition of the CQ Energy Canada Partnership for C$722 million; RMP Energy Inc. completed the sale of a large portion of its producing asset base on its way to becoming Iron Bridge Resources Inc. in the near future; and Crescent Point Energy revealed a set of noncore asset sales for a combined C$190 million in its third quarter results release. Over 14,500 boe/d was also put up for sale in public asset listings.