The combination of Cenovus Energy Inc. and Husky Energy Inc. will create one of North America’s top 10 producers.

Using production figures quoted by all publicly-quoted North American producers at the end of Q2, the merged Cenovus/Husky produced 660,000 boe/d in North America during the three months ended June 30, 2020.

At the end of June, Cenovus was the 13th largest producer in North America, while Husky was 35th (see note 1). Using Cenovus’s previous ranking as a starting point, the merger vaults the pairing five places higher into the top 10 and over fellow oilsands producer Suncor Energy Inc.

The top 10 ranking has been adjusted using the Evaluate Energy M&A database for deals that have taken place since the end of June. All figures quoted below assume deals that are currently in progress will all be completed.

M&A activity has also seen a major move of seven places up the rankings for ConocoPhillips. The company is currently working through the $13.4 billion (including debt) acquisition of Concho Resources Inc. in the U.S. and has already completed the $390-million acquisition of Montney production in Canada from Kelt Exploration Ltd. The two deals add around 334,000 boe/d to ConocoPhillips’s Q2 North American production of 526,000 boe/d, meaning it now ranks fifth among producers in the U.S. and Canada.

Devon Energy Corporation’s merger with WPX Energy Inc. means that combination will join Cenovus in rising five places in the rankings from Devon’s previous spot, while other key acquisitions by Chevron Corporation, Pioneer Natural Resources and Southwestern Energy see each of these acquirers move up too.

For more analysis on the Cenovus-Husky merger, visit our partners at the Daily Oil Bulletin at the following links: 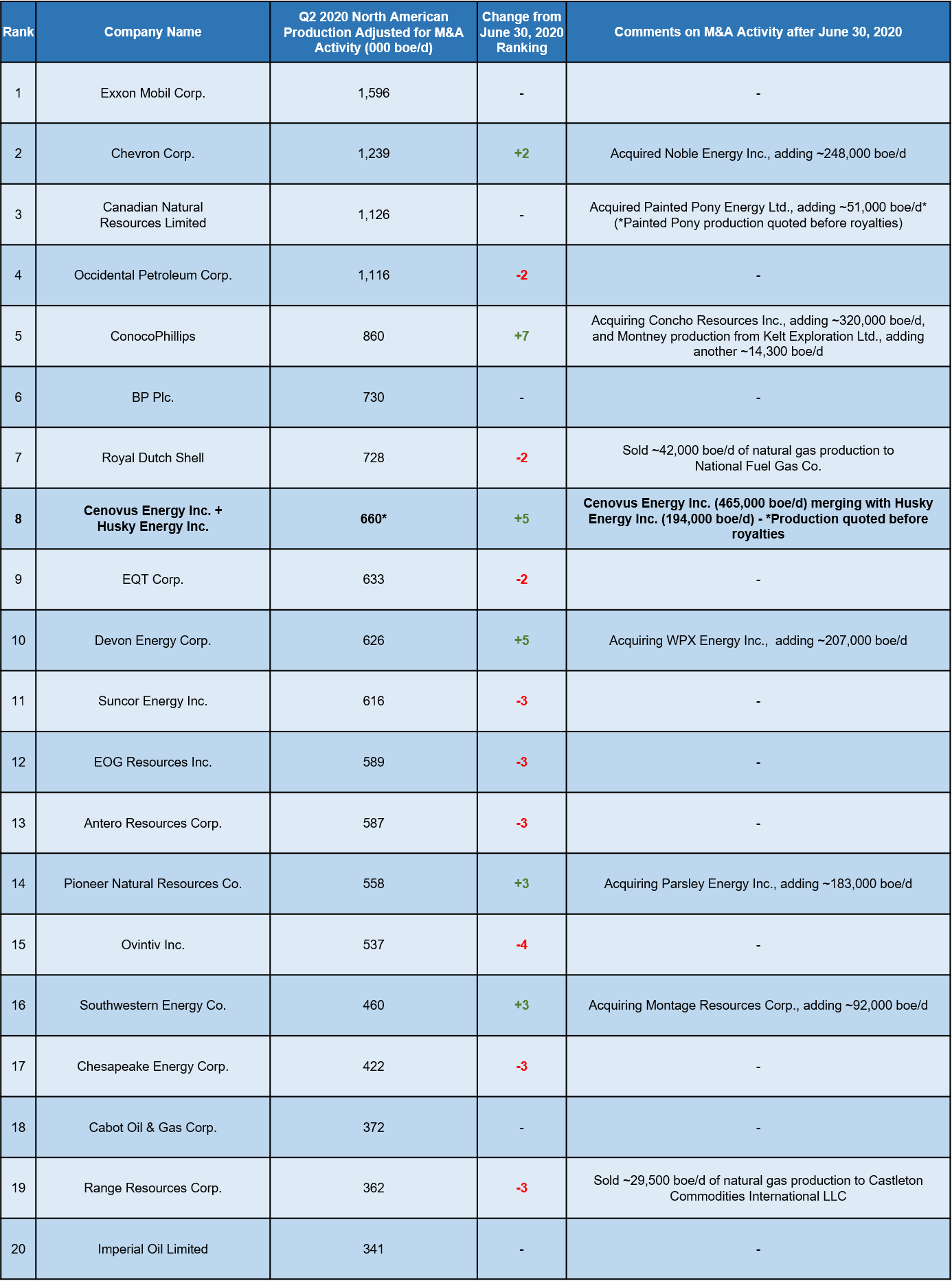 Source: Evaluate Energy F&O and Evaluate Energy M&A. All production is quoted after royalties where possible, except for Cenovus-Husky combination and the 51,000 boe/d addition of Painted Pony production to CNRL. Production outside of North America is not included in this table.

Note 1: The exact ranking pre- and post-merger for Cenovus and Husky is slightly murky, as the two producers only quote production on a pre-royalty basis, while every other producer in the table has been ranked based on post-royalty production for as fair a comparison across the entire group. This means that Cenovus and Husky production figures will be slightly higher than the other producers in the top 20, purely because they are reported on a different basis. Husky’s production in Asia is not included in any of the analysis above.

Update: 28/10: Chevron agreed a deal to sell its 450 mmfe/d (75,000 boe/d) Appalachian Basin assets to EQT Corp for $735 million. Chevron’s ranking in the table was unaffected, but assuming the deal completes then EQT would leapfrog the Cenovus-Husky combination into 8th place with the extra production.