Proved oil and liquids reserves for 67 U.S.-listed companies fell for the second year in a row in 2016, according to fresh analysis from the U.S. Energy Information Administration (EIA) using Evaluate Energy data. 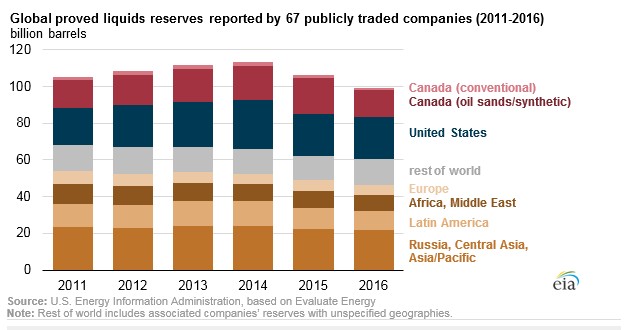 The EIA’s analysis, which can be viewed in full at this link, concludes that the decline was primarily due to a handful of larger companies recording a significant drop in Canadian oilsands reserves.

Other causes listed by the EIA include high production levels, downward revisions of existing resources and relatively low levels of extensions and discoveries.

The full article, which also includes analysis on these 67 companies’ production portfolios, is available at this link.

EIA has also released its annual financial review for global oil and gas in 2016, which can be downloaded here. This report is also based entirely on oil and gas company data provided by Evaluate Energy.