Debt reduction has been a hot topic in past year in Canada, as companies adapted to a lower-for-longer price environment.

Out of 70 domestic and international producers listed on the TSX, Q3 2016 data available in CanOils reveals that Encana Corp. (TSX:ECA) has cut debt by the largest monetary value over the past year. The company has removed just under Cdn$2.6 billion of debt from its balance sheet between Q3 2015 and Q3 2016 (see note 1), a reduction of around 30%. 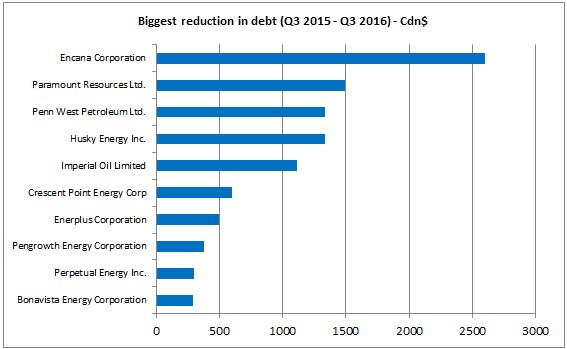 The TSX-listed company that has shaved the most debt off its previous year’s balance sheet proportionately is Touchstone Exploration Inc. (TSX:TXP). By cutting its debt by Cdn$6.6 million, Touchstone’s debt levels are 93% lower in Q3 2016 than in Q3 2015.

In terms of domestic producers, Paramount Resources Ltd. (TSX:POU) cut its debt by the largest percentage (84%) over the same timeframe, using funds generated in an asset sale that was the largest E&P deal of the year in Canada. 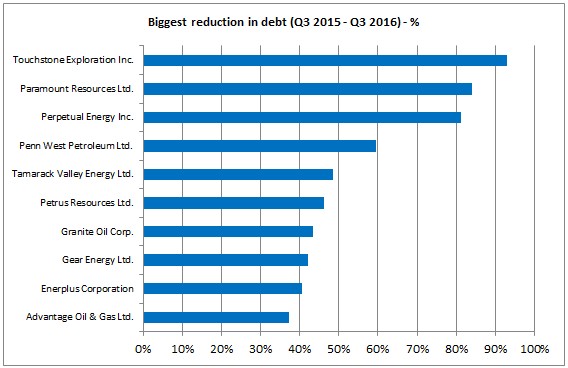 Subsequent to Q3 2016 – and therefore not in these figures – RMP Energy Inc. (TSX:RMP) closed a deal with Enerplus Corp. (TSX:ERF) to sell its assets at Ante Creek for Cdn$114.3 million. The sale proceeds allowed RMP to eliminate its bank debt.

Not all companies reduced debt. Suncor Energy Inc., (TSX:SU) the TSX’s largest current producer, saw the largest debt increase in terms of actual value between Q3 2015 and Q3 2016. Suncor’s debt rose by Cdn$2.9 billion after a busy year of acquisitions. Painted Pony Petroleum Ltd. (TSX:PPY), Oilweek’s producer of the year for 2016, saw debt increase by the largest proportion over the 12 month period, more than ten-fold, to Cdn$537 million. This was mainly due to a new finance lease being accounted for upon the start-up of operations at a gas processing facility and pipeline.

For those domestic operators that have reduced debt by significant margins, focus can switch to other pressing problems relating to the downturn, such as Licensee Liability Ratings (LLR).

This article focuses on the headline debt figures for 70 TSX E&P companies only. More complicated debt analysis for all TSX and TSX-V listed E&P companies, including credit facility usage, liquidity ratios and changes in company capital structures over time, for example, can be carried out with CanOils financial and operating data. Find out more by downloading our brochure here.

1) Encana is one of a handful of TSX-listed companies in this article that report financial statements in US$. The exchange rate used for all data is US$1 = CDn$1.30919. This was the period end rate for Q3 2016.