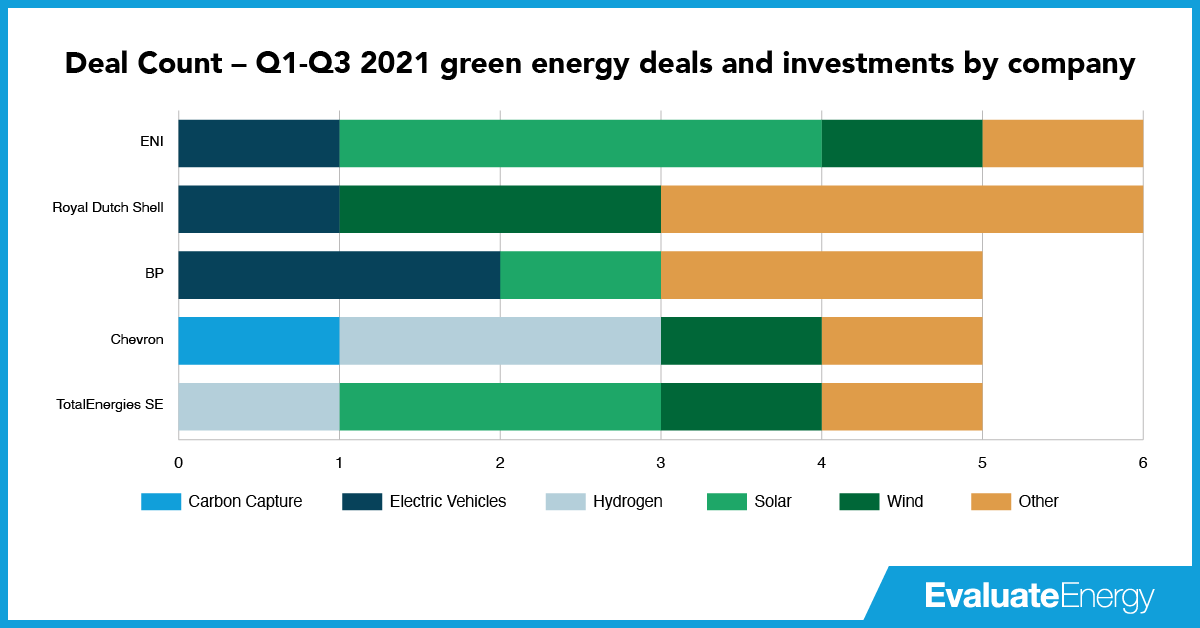 Eni and Shell have been the most active among traditional oil and gas producers when it comes to green energy sector deal making in 2021, according to a new report from Evaluate Energy.

Over the past few years, intense and consistent investor pressure over carbon usage and climate goals has prompted many E&P companies to explore options in greener energy sectors and diversify their portfolios.

Evaluate Energy’s new report includes a rundown of every upstream deal in Q3 2021 and details on green energy investments by oil and gas producers. It is available for download at this link.

Eni’s busy third quarter is the reason for its position atop the rankings.

“Four of Eni’s six green energy deals were announced between July and September,” said Mark Young, report co-author and Senior Analyst at Evaluate Energy. “These latest investments will see the company acquire Italy’s second largest operator in the electric vehicle charging space, as well as increase its European wind and solar operational capacity by over 650MW.”

Shell joins Eni with six investments made up to September 30.

“Early activity from Shell this year was also mainly focused on European markets, but its two most recent investments have both been in the U.S.,” said Young. “These two U.S. deals included the acquisition of a renewable energy residential retailer and a sustainable fuels producer.”

Details on all of Q3’s major green energy investments by Eni, Shell and other upstream companies are available as part of Evaluate Energy’s latest M&A report.

Note for chart: “Other” includes deals in the following sectors, among others: Biomethane, Geothermal, Hydro, Retail power from renewable energy, Green energy-related technology.