Evaluate Energy renewable energy deal data shows that, so far, Europe has seen 100 deals agreed for wind power assets in 2020. France accounts for one fifth of activity. The U.K. ranks just behind with 16 deals corporate mergers or asset acquisitions, followed by Germany, Sweden and Norway. 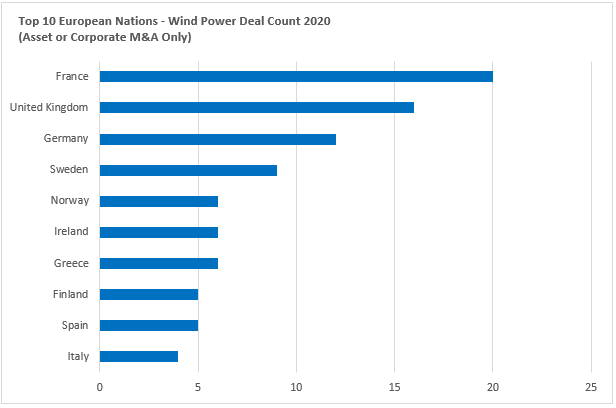 France also leads other European nations in terms of the power generation capacity involved in this year’s wind power deals. So far this year, France has seen deals for stakes in over 5.6 GW of wind projects. Only 10% of this value was comprised of existing, producing projects, with the bulk of deals focused on projects under development. 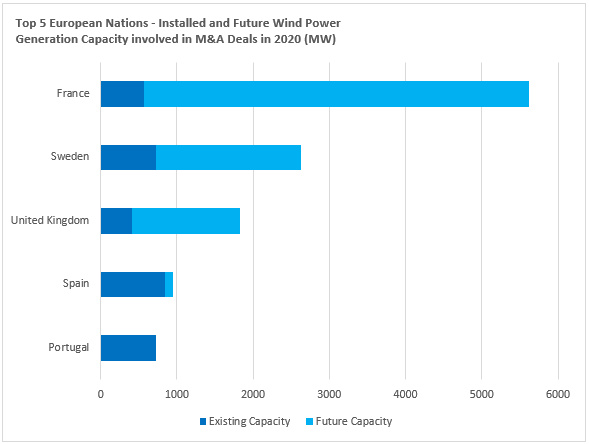 “The U.K. and Sweden have similar profiles to French activity when it comes to deal-making in the wind sector,” said Eoin Coyne, Evaluate Energy’s lead M&A analyst. “Most of 2020’s deals were made for projects under development.”

“In contrast, Spain – which is by far Europe’s leader when it comes to solar power deals in 2020 – and Portugal also rank highly here when it comes to wind power capacity changing hands, but the majority of this capacity in both nations is already producing,” he continued. “Germany ranked highly on deal count but does not appear in this capacity ranking as the deals there were all for small scale projects, relatively speaking.”

In terms of key developments for the sector at large, Coyne pointed to the activity of one of the traditional oil and gas supermajors as something to keep a close eye on.

“Looking at the more high-profile activity through the lens of the ‘energy transition’ here, it is interesting to see Total’s involvement in the European wind sector,” he said. “Our data shows that Total has been involved in deals including 1.6GW of future production capacity in France and the U.K. in 2020 and was the only traditional oil major to really make any significant impact on the M&A market for European wind power at all this year.”

Evaluate Energy’s M&A database includes data on every deal made in the global power and wider energy sectors.