Evaluate Energy’s latest M&A report shows that the third quarter witnessed $41.7 billion of new upstream oil and gas M&A deals. This is a 50% increase in total spending compared to Q2 2017 and it is also just above the average quarterly spend of $39.8 billion since the oil price downturn began in late 2014. Download the full report here. 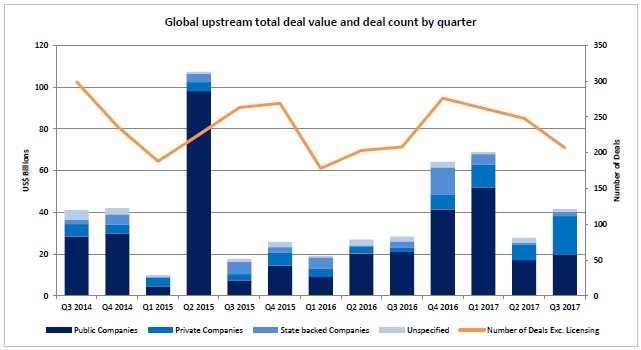 The largest deals this quarter included, among others:

Meanwhile, in the U.S., the Permian Basin still dominates U.S. activity in 2017 despite a second consecutive quiet quarter of deals, in which the STACK formation and Williston Basin saw the country’s biggest deals.

For analysis on all the major deals this quarter, download the Evaluate Energy Q3 2017 upstream M&A review here.