Analysis in Evaluate Energy’s new M&A report shows that Q1 2016 saw the lowest number of newly announced M&A deals in the global upstream oil and gas sector – 157, excluding licensing rounds – take place than at any time during the price downturn. The previous lowest number of deals was recorded a year earlier in Q1 2015 and Q1 2016’s deal count was 11% lower than that. Low commodity prices are continuing to cause a lack of confidence in the M&A market, but with oil prices increasing – WTI averaged US$4.20 higher in March than in February 2016 – activity may pick up in Q2.

While the deal count was low, Q1 2016’s combined total deal value in the upstream sector of US$18.5 billion was also among the lowest quarterly values in recent times. It would have been even lower, had it not been for a number of high value deals that bolstered the total considerably. Dominion Resources Inc. (NYSE:D) agreed to acquire Questar Corp. (NYSE:STR) for US$6 billion in this quarter’s biggest deal and Rosneft made two multi-billion dollar asset sales in Siberia to a group of Indian E&P players.

The quarter’s biggest deals in the U.S., Canada and around the world are analysed in detail in this report, which can be downloaded here. 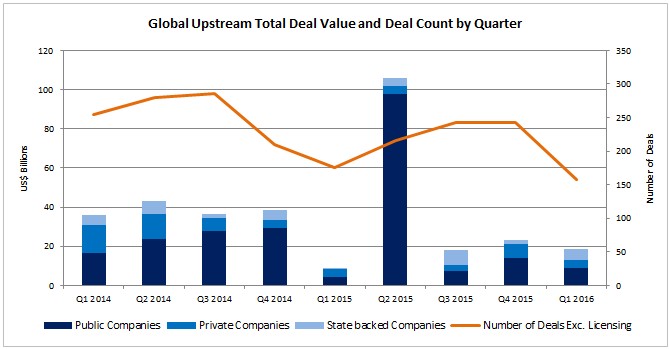 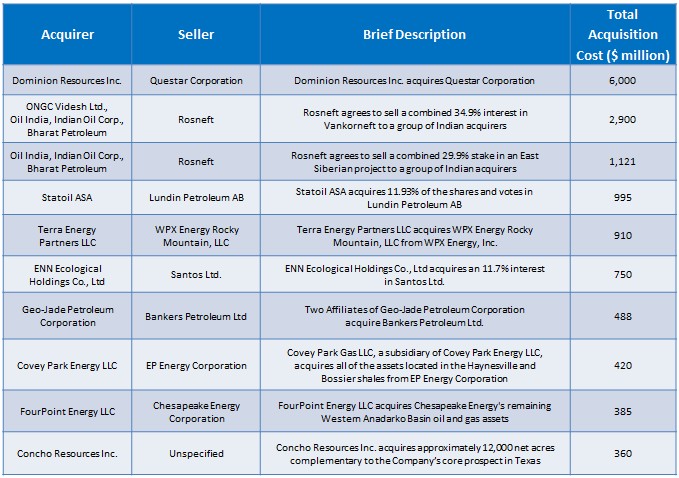