Total global spend on upstream M&A deals rose an encouraging 38% in the second quarter, driven by improved oil prices and market confidence, according to Evaluate Energy’s review of global upstream oil and gas M&A activity in Q2 2016, which can be downloaded now.

Oil exceeded $50 a barrel during Q2 – the first time it has done so since July 2015. This is clearly a principal driver of M&A activity; should prices continue to rise, we would anticipate deals to follow.

Q2 upstream deals were worth a combined $25.6 billion, according to our latest data, compared to $18.5 billion in Q1. Yes, banks remain wary of over-committing on oil assets, but several companies are acting now rather than waiting for further rises in prices and asset values.

Download the full report here for details on all the major deals, the motivation behind them, exclusive analysis and a brief outlook for the rest of 2016. 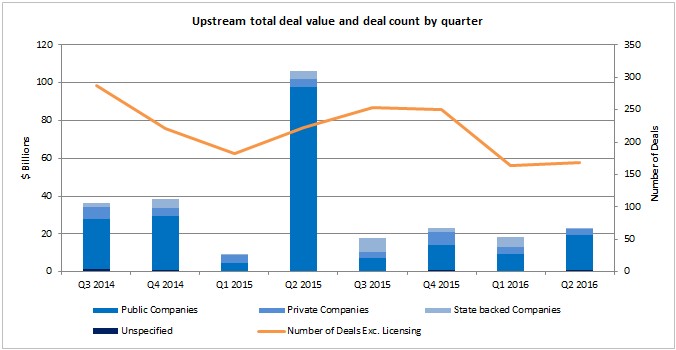