Weak demand related to COVID-19 is hurting company finances and resulted in a series of U.S. upstream deals much more akin to friendly mergers than aggressive takeovers.

That is a key takeaway from Evaluate Energy’s latest M&A report – available to download here – that analyses all major upstream deals globally in Q3 2020.

The third quarter saw $24 billion in deals – a significant uptick on the historic low of just $4 billion recorded in Q2. Friendly U.S. mergers, or mergers of equals, featured heavily. 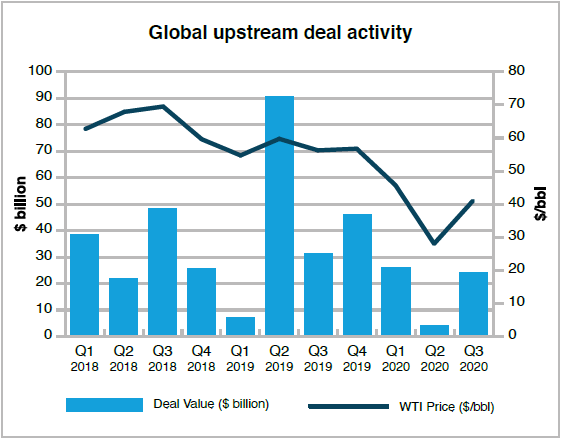 “These mergers are characterized by acquisitions where the share premium is either non-existent or is far lower than the usual level required to convince target company shareholders to part with shares,” said Eoin Coyne, Senior Analyst at Evaluate Energy and report author.

“The drop in oil demand and price has strained company finances and pushed some into viewing the safe harbour of a larger, better leveraged company as the best option.”

“This industry consolidation is a trend that is likely to continue should the oil price remain below the break-even level required by many producers,” added Coyne.