Falling production, rising debt and reduced reserve life were among the chief issues facing Pemex, Mexico’s national oil company. Historic reforms were introduced by Mexico’s government in 2013 to try and spark a significant reversal in performance of both Pemex and the country’s hydrocarbon production as a whole.

That is among the key findings of a new report published by the Daily Oil Bulletin, Sproule and Evaluate Energy. A fundamental goal of Mexico’s energy reforms, which began in 2013, was to drastically improve the fortunes of Pemex. Pemex is a key source of government income and the company faced challenging times in recent years:

Aside from reducing the company’s heavy tax burden and pension liabilities, the reforms allow Pemex to pursue outside investment via joint ventures and to join consortiums bidding for new acreage.
Full details on the reforms are available in the report, which can be downloaded here.

Pemex has sought partners to create joint ventures on key development opportunities that previously it could not tackle alone. Encouragingly, it has now agreed to three deals worth a combined $1.2 billion in cash, cost carries and cost reimbursements.

At the end of 2016, Pemex also began participating in Mexico’s bid rounds for the first time. In the country’s first deepwater bid round (1.4), the company won one block in partnership with Chevron Corp. and Japan’s Inpex Corp. A few months later, Pemex secured two shallow water blocks, one in partnership with Colombia’s Ecopetrol and the other with Germany’s DEA Deutsche Erdoel AG, as part of the shallow water round 2.1. In early 2018, in the deepwater round 2.4 and the shallow water round 3.1, the company was awarded 11 further blocks. A handful of these were awarded to Pemex as the sole bidder while others saw Pemex win via more consortiums – providing Pemex with additional very experienced, successful and deep-pocketed international explorers as partners. The companies, along with the number of blocks Pemex will partner with them on, are listed below. 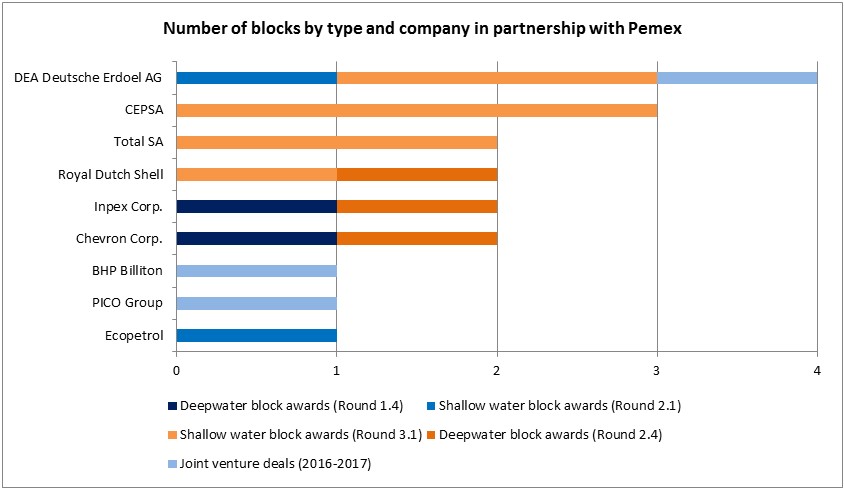 The new report from Evaluate Energy, Sproule and the Daily Oil Bulletin also focuses on:

Notes:
1) “Proved reserve life” is the number of years at current production levels it would take to deplete all proved reserves.