Oil production has fallen dramatically and acquisition deals have ground to a virtual halt so far in 2016 in Nigeria, as the country continues to grapple with militant attacks on energy installations.

The concerns over export levels centre on oil installations in the Niger Delta that have been repeatedly targeted in recent months, creating significant unrest and threatening oil export volumes. 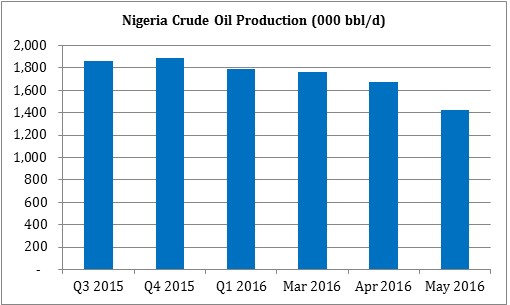 Among Africa’s OPEC-member nations, the same OPEC data indicates Nigeria lagged behind Angola in terms of year-to-date crude oil production to May. Our Evaluate Energy data indicates that oil exports from Nigeria topped out in 2010 at 2.25 million b/d. With the exception of a small increase in 2014, exports have fallen every year since 2010, and stood at just over 2 million barrels in 2015.

As market uncertainty prevails in Nigeria, merger and acquisition activity has fallen dramatically. According to our 2016 data, so far this year just two deals have been announced. That compares to 13 deals announced in each of the two years prior.

The larger of the two deals in 2016 involved Canadian-listed Mart Resources Inc. (TSX: MMT), which agreed a Cdn$367 million deal (including debt) to be acquired by Midwestern Oil & Gas Company Ltd. and San Leon Energy Plc.

Midwestern had originally considered purchasing Mart in March 2015 – a deal that would have been worth around Cdn$524 million (including debt) at the time. Later that year, Mart was courted by Delta Oil Nigeria BV in a Cdn$394 million deal. That deal, however, was terminated due to deteriorating oil prices. Our Canoils Canadian asset team covered in-depth Mart’s various agreements to sell the company in our usual monthly M&A reviews: http://info.evaluateenergy.com/evaluate-energy-canoils-oil-gas-reports-studies-for-download

While M&A deal-flow has dried up, the activities of a militant group, known as the Niger Delta Avengers (NDA), have continued. The NDA’s demands are varied and are reported to include the ownership structure of oil blocks:  http://www.ibtimes.co.uk/who-are-niger-delta-avengers-nigerias-oil-gas-production-threatened-by-new-militants-1559022

In the past week, the militants struck again. According to reports, the NDA blew up three manifolds operated by Chevron Corp. The NDA claims to have also blown up a well and pipelines in the country’s southern oil hub: http://www.reuters.com/article/us-nigeria-delta-chevron-idUSKCN0ZM2O9

While efforts are made to tackle the disruption, markets will watch on in hope of a resolution. As a side note, a Nigerian, Dr. Mohammed Sanusi Barkindo, takes the helm as secretary general of OPEC next month: http://www.opec.org/opec_web/en/press_room/3529.htm. Dr. Barkindo is formerly a managing director of state enterprise the Nigerian National Petroleum Corp.