Markets and the oil and gas industry reacted this morning after the United Kingdom voted to leave the European Union in a historic decision that triggered Prime Minister David Cameron to resign.

“Leave” campaigners polled 52% in a vote that rebutted economic and political arguments for staying within the EU provided by Prime Minister Cameron and other prominent “Remain” supporters. Voting was heavily split regionally – with a majority of voters in London and Scotland expressing a desire to remain within Europe.

Canadian Mark Carney, governor of the Bank of England, said today the UK could expect market volatility as it begins the process of renegotiating trade agreements with the EU and wider world.

“The Treasury and the Bank of England have engaged in extensive contingency planning and the chancellor and I have been in close contact, including through the night and this morning,” he said in a statement.

“The Bank will not hesitate to take additional measures as required as those markets adjust and the UK economy moves forward. These adjustments will be supported by a resilient UK financial system – one that the Bank of England has consistently strengthened over the last seven years. The capital requirements of our largest banks are now ten times higher than before the crisis. The Bank of England has stress tested them against scenarios more severe than the country currently faces.”

The expected volatility was seen as markets opened this morning. The FTSE fell 8% and the value of the UK pound dropped while the price of Brent oil fell by 5.2%. Both the FTSE and Brent regained some ground in later morning UK trading.

Prime Minister Cameron had staked his political future on the outcome of the referendum. He announced his intention to resign in the hours that followed the “Brexit” result, as well as providing a sense of the timing for new leadership to take his place by this fall.

Oil & Gas UK, the leading representatives for the UK’s offshore oil and gas industry, this morning hoped that all those involved will now come together and “work constructively” to make the EU transition as smooth as possible.

“We ask that the UK Government clearly outlines the process which will follow to minimize any potential period of uncertainty. The UK oil and gas industry is at a critical juncture and we need to ensure the UK Continental Shelf continues to attract investment and be seen as a great place to do business.”

The UK Government identifies security of domestic energy supply as a key part of the UK’s energy plan. It has been exploring alternative sources of domestic energy, including the creation of a shale gas sector. The UK became a net importer of oil in 2006, of gas in 2004 and for a combination of oil and gas in BOE in 2005.

Earlier this week, chief executives at three of the top four UK oil and gas producers publicly urged voters to remain within the European Union. Among them were CEOs at Anglo-Dutch Royal Dutch Shell, BP Plc. and France’s Total, who featured in media outlets in a list of prominent pro-EU business leaders, together with executives from Centrica plc and smaller producers active in the UK such as EnQuest plc, ENGIE, MOL and BHP Billiton.

According to data from Evaluate Energy, the energy executives who declared in favour of staying control approximately 510,000 boe/d of UK North Sea production. 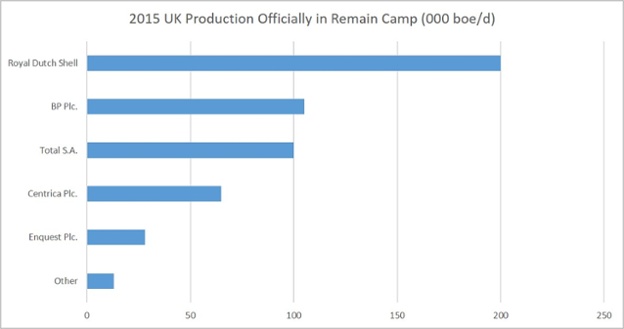