New data available in CanOils’ M&A review for April 2017 illustrates the flurry of sales activity undertaken by Pengrowth Energy Corp. (TSX:PGF) since 2013 – with deals for its assets totalling more than Cdn$1.7 billion.

Almost Cdn$460 million of these deals have been agreed since the start of 2017, with the company having been strongly focused on debt repayment in recent periods. 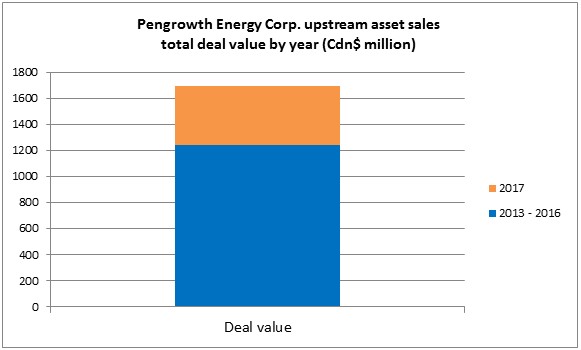 The company’s most recent sale, a Cdn$185 million sale in the Swan Hills area, is featured heavily in CanOils’ latest report alongside all major April upstream deals in Canada.

In total, the month witnessed Cdn$855.5 million in new upstream deals announced for E&P assets across the whole of Canada, meaning Pengrowth’s most recent deal was around 22% of the overall April total. For more on all this month’s activity, download the report here.

The report also provides analysis on every new upstream asset that was listed for sale in Canada this month. While the size of assets was well below the rolling 12-month average of 20,000 boe/d, April did see some interesting minor assets put up for sale. For more, download CanOils’ M&A review for April 2017 here.