The Marcellus shale stepped out of the huge shadow cast by the Permian Basin and recorded the largest single upstream M&A deal of Q2 2017, according to new analysis in Evaluate Energy’s Q2 2017 Upstream Deals review, which can be downloaded here.

The deal will see EQT Corp. (NYSE:EQT) acquire Rice Energy Inc. (NYSE:RICE) for US$8.2 billion, comprised of stock, cash and the assumption of US$1.5 billion in debt. The Marcellus also saw another significant deal in Q2, whereby Noble Energy Inc. (NYSE:NBL) agreed to sell its position in the play for just over US$1 billion. In total, deals involving Marcellus assets totalled US$9.4 billion in Q2 2017; the highest ever quarterly M&A spend in the play.

The largest single deal in the Permian this quarter was just over US$600 million. In total, the basin completely bucked recent trends with just US$2.4 billion in new deals – its lowest total since Q1 2016.

Throughout the oil price downturn and the rest of 2016, the Permian Basin has been the hotbed of upstream M&A activity, not just in the United States, but worldwide. The Permian, with its strong economic rationale, profile and drilling activity levels, has seen deals totalling over US$61 billion since the end of 2014, representing 15% of the global upstream total. Furthermore, Q1 2017 saw the largest single quarterly outlay that the basin has ever seen at US$19.6 billion.

That’s not to say the Marcellus didn’t have any activity throughout 2016. In fact, as we wrote a few months ago, 2016 saw a resurgence in demand for asset packages in the gigantic gas play in the Appalachian basin. But over the past year and up until Q2, M&A has clearly been dominated by the Permian. 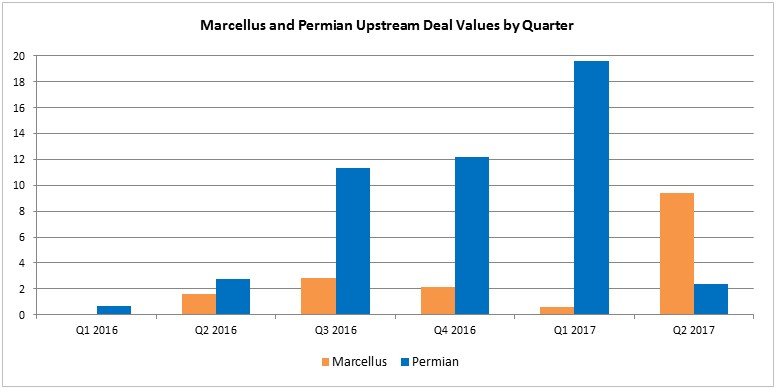 This quarter also saw U.S. assets change hands in the San Juan and Piceance basins, with ConocoPhillips (NYSE:COP) and Encana Corp. (TSX:ECA) trimming non-core operations. Outside of the U.S., last quarter’s major deals in the Canadian oilsands completed while two major European utilities in France’s ENGIE and Denmark’s DONG Energy agreed deals to sell most or all of their E&P business segments. DONG is exiting the sector completely, while ENGIE will be retaining a minority stake in a large Algerian gas field.

For more on all of these stories and detailed single deal analysis, download the Evaluate Energy Q2 2017 M&A review here.