New analysis in Evaluate Energy’s M&A Review for Q1 2016 shows that privately held companies had a huge impact on the United States’ upstream oil and gas industry in recent months. While the biggest deal in the U.S. involved two public companies – Dominion Resources Inc. (NYSE:D) agreed to acquire Questar Corp. (NYSE:STR) for US$6 billion – the next biggest deals all involved a public company selling assets to a privately-held acquirer. In total, U.S.-based private companies were the acquirers in US$3.5 billion worth of asset and corporate deals in the U.S. during Q1 2016, a figure that also stands out because the total value of newly announced E&P deals by all companies worldwide was only US$18.5 billion.

The largest deal involving a private acquirer for E&P assets in the United States during Q1 2016 was a US$910 million sale by WPX Energy Inc. (NYSE:WPX). To help reduce its substantial debt position, which stood at around US$3.1 billion at the end of 2015, the company sold its Piceance Basin assets in Colorado in an all-cash deal to Terra Energy Partners LLC. The assets currently produce around 500 mmcfe/d and cover 200,000 net acres. The sale will leave WPX with its positions in the Delaware Basin, the Williston Basin and the San Juan Basin to focus on moving forwards. The company also made a significant US$309 million gathering system midstream sale in the San Juan Basin this quarter to further bolster its debt-reduction strategy. Terra Energy Partners LLC, the acquirer of WPX’s Piceance Basin assets, is a private exploration and production company formed to pursue the acquisition and development of large, long-life producing oil and gas assets in North America. It is funded by equity commitments from Kayne Private Energy Income Fund and Warburg Pincus.

Another large private company deal involved Dallas-based Covey Park Energy LLC, which announced a US$420 million acquisition of EP Energy Corp.’s (NYSE:EPE) Haynesville and Bossier shale gas assets that are located primarily in Louisiana. EP Energy recorded nearly US$5 billion in long term debt in its 2015 annual results and this deal presumably is targeted at reducing that figure. Other multi-million deals by private acquirers in the U.S. saw Chesapeake Energy Inc. (NYSE:CHK), Concho Resources Inc. (NYSE:CXO) and ConocoPhillips (NYSE:COP), among others, sell off assets in Q1 2016. More details on the largest private company deals in the United States, as well as a full review of the biggest and most significant deals in the U.S., Canada and around the world, can be found in Evaluate Energy’s review of global E&P deals for Q1 2016.

Top 5 Upstream M&A Deals in the U.S. During Q1 2016 Involving a Privately-Held Acquirer 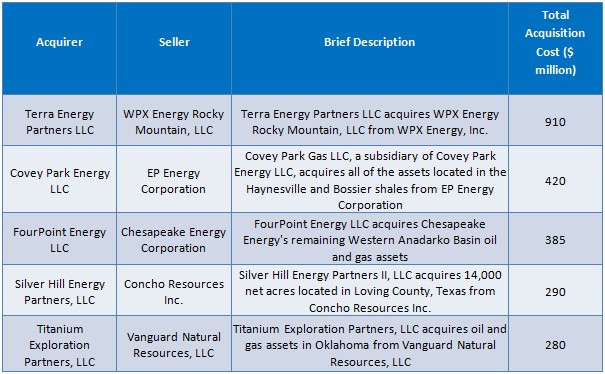