California is home to two of North America’s highest cost oil producers by far according to latest data from Evaluate Energy.

Earlier, we looked at North America’s lowest cost oil producers – and this analysis on high-cost producers is based on the same Evaluate Energy operating and transportation expenses per barrel data for 28 companies in Q4 2019.

Low cost production is just one key indicator that investors and industry observers will be looking for in order to identify oil producing companies more likely to make it through the current downturn.

Our key conclusions from looking at the operating and transportation expenses (“production costs”) for the higher-cost producers of the group are as follows. 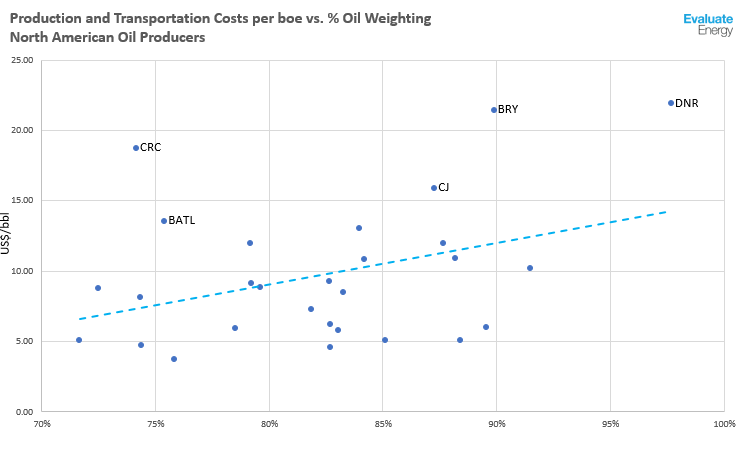 As we did in our earlier post on low cost producers, we paid very close attention to the trend line on the chart, calculated using the production costs of all companies in the group. It shows that as oil weighting increases, so does the average cost per barrel to produce for each company.

Therefore, knowing a company’s cost per barrel does not immediately help you identify high- or low-cost producers, you must know what the costs are relative to its particular portfolio before drawing any conclusions.

High cost producers, based on production costs and portfolio

California is home to the two highest cost producers of the group, relative to their portfolios. California Resources Corporation (CRC) and Berry Petroleum Corporation (BRY) lie furthest from the trend line out of all companies in the group on both the high- and low-cost ends of the spectrum. The costs are so high here at $18.67 and $21.44, respectively, that they are almost anomalies in the data set. They drag the trend line upwards, which is causing some of the lower cost operators to look much better off than they probably should.

As for the other companies appearing to have higher costs than the others, enhanced-oil recovery focused Denbury Resources Inc. (DNR) has the highest cost per barrel of the whole group in pure dollar terms at $22.46/boe. The company is also the most oil-focused of the group so that plays a significant role here.

Battalion Oil Corp (BATL) is also among the higher cost companies of the group at $13.53/boe for a 75% oil portfolio. The company is now focused on the Permian after a recent restructuring and emergence from Chapter 11 bankruptcy proceedings in the third quarter of 2019.

The highest cost Canadian operator relative to the trend line was Cardinal Energy Ltd. (CJ). The company has a portfolio made up of 88% oil and recorded a Q4 production cost of C$20.58/boe.

It is important to point out, of course, that a company’s health cannot be determined by taking only its production costs into account. Relatively high costs alone aren’t necessarily a reason for panic. Costs merely form one piece of the puzzle.

To illustrate this, we’ll draw on the example of Whiting Petroleum. The company is part of this analysis group and recorded operating and transportation costs of $7.28/boe, between $2-$3 below the trend line for a company of its oil weighting (82%). Relatively low costs alone did not save the company from filing for Chapter 11 bankruptcy, which was announced at the start of April, due to its debt position.