North Dakota’s Bakken formation, the Permian Basin and the Eagle Ford shale are home to some of North America’s lowest cost oil producers according to latest data from Evaluate Energy.

This analysis was conducted using Q4 2019 operating and transportation expenses per barrel (“production costs”) for 28 publicly listed, oil-focused producers from Canada and the United States. Production tax costs in the U.S. are excluded, as are royalty expenses in Canada.

Low cost production is just one key indicator that investors and industry observers will be looking for in order to identify oil producing companies more likely to make it through the current downturn.

The most recent production cost data, along with our key conclusions, are presented below.

Click here for analysis on the highest cost producers from the same data set. 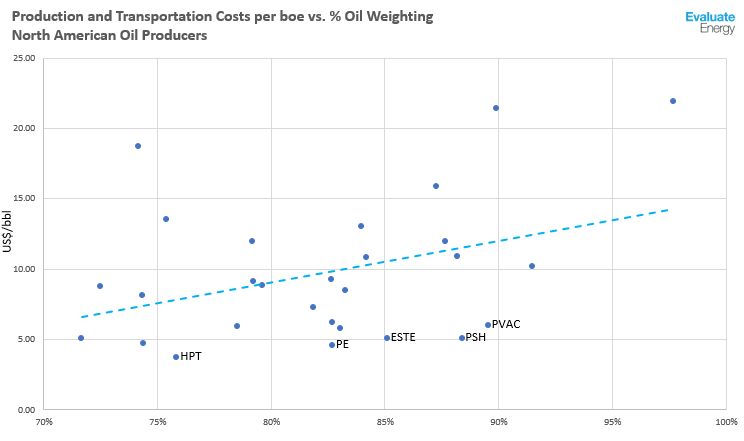 The trend line on the chart, calculated using the production costs of all companies in the group, shows that as oil weighting increases, so does the average cost per barrel to produce for each company.

So even if one company was producing at $2 higher than another in the group, that might not mean that it is a “higher cost operator” than the other company. It could just be a larger figure because oil makes up a higher proportion of the portfolio for that particular company.

Based on the combined metrics of costs per boe and each company’s oil weighting, we have identified the lowest cost producers based on Q4 2019 data.

The lowest cost Canadian-headquartered producer in the group was Petroshale Inc. (PSH). The company’s portfolio is made up of 88% oil and its combined operating and transportation expenses per barrel came in at C$6.65/boe from its North Dakota Bakken and Three Forks assets in Q4 2019. This is furthest away from the trend line on the low-cost side of the chart than any other producer in the 28-company group.

Penn Virginia Corporation (PVAC) and Earthstone Energy Inc. (ESTE) lie furthest away from the trend line among the U.S.-domiciled contingent, relative to their portfolio make-up based on Q4 data. Penn Virginia operates in the Eagle Ford and its operating and transportation expenses were $5.98/boe, while Earthstone’s Permian and Eagle Ford production came in at $5.07/boe. Parsley Energy (PE) is another Permian producer with relatively low costs at just $4.60/boe for an 83% oil portfolio.

The lowest overall cost per boe recorded among the entire group was Niobrara-producer Highpoint Oil Corporation (HPT) with expenses coming to just $3.70, but only six companies in the group produced a greater level of gas relative to their portfolio that Highpoint and higher gas content results in lower production cost figures, in pure dollar terms.

Of course, producing at low costs is not the only factor that will keep companies healthy during this period of low prices. It is a key indicator for sure, but it is only one piece of the puzzle.

Whiting Petroleum is part of this analysis group and recorded operating and transportation costs of $7.28/boe, between $2-$3 below the trend line for a company of its oil weighting (82%). Relatively low costs alone did not save the company from filing for Chapter 11 bankruptcy, which was announced at the start of April, due to its debt position.