Five multi-billion-dollar deals made Q4 2020 one of the highest value quarters for upstream M&A in recent memory, totaling US$43 billion based on new research from Evaluate Energy. 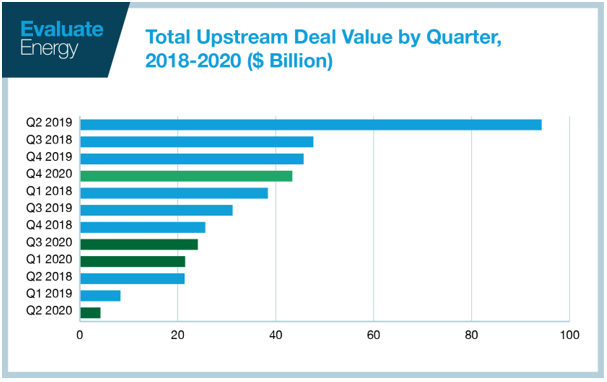 ConocoPhillips, Pioneer Natural Resources and Diamondback Energy all made huge moves towards the end of a year of turmoil for oil and gas. Recent pricing stability and indications of increased capital expenditure in 2021 are providing some relief for embattled producers and suppliers.

Our M&A report for the full year 2020 is available for download now too.

“Deal activity had begun to pick up in Q3, especially in North America, having dried up almost entirely after March in the upstream sector,” said Eoin Coyne, Senior M&A Analyst at Evaluate Energy in London. “That late Q3 period saw a series of friendly, low-premium mergers agreed. This trend continued strongly in Q4 to boost overall industry spending.”

“The quarter saw $43 billion in new E&P deals around the world,” added Coyne. “At first blush this looks like a major uptick in activity, even going back a few years. The top 10 deals, however, made up 88% of the total quarter value by themselves, meaning that Q4 only really saw an uptick in spending, rather than deal-making activity in general.”

The full list of top 10 deals includes data on acquisition costs and how much equity, if any, was included in agreed payment structures. The data also shows how much production was involved in each deal. Download it here.

Evaluate Energy is headquartered in London and specializes in global oil, gas and renewable energy intelligence. It is a sister brand of the Daily Oil Bulletin.