In response to changing attitudes to debt and fewer asset sales, companies have been more inclined to issue shares to source external cash in recent periods (see notes). This trend started in Q1 2015, as the commodity price downturn began to impact cash flow, and has become more pronounced ever since. 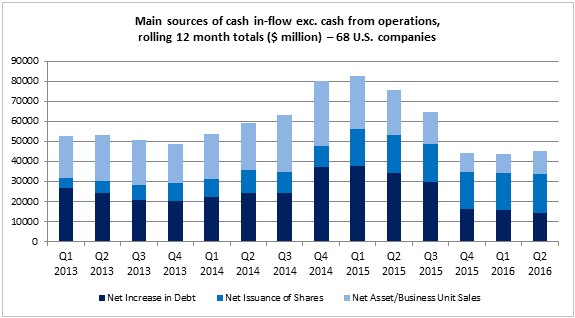 This finding is among several key conclusions of the new study that unpacks the altered relationship between cash flow and capital expenditure in the U.S. oil and gas space. For more information on the study, click here.

Of course, the value of the individual shares being sold will be much lower than in 2013 or 2014, but U.S. oil companies have clearly had success selling shares in recent periods, despite the challenging climate, perhaps looking to benefit from bargain hunting investors looking to enter the oil market at a low price.

The movement towards share issuance in part reflects the oil price drop and a major reduction in the ability to secure debt financing, given continued market uncertainty. Since Q3 2014, the amount of cash raised by U.S. oil and gas companies via a net increase in debt dropped by almost two-thirds to US$14.2 billion. The study discovered that, in fact, the 68 U.S. companies raised the least amount of cash in Q2 2016 through net debt increases than in any other quarter over the entire three year period.

This raising of external finance, and the movement towards issuing shares, has been necessary for U.S. oil and gas companies because their operating cash flow is not covering their capital expenditure needs. While this internal financing gap between operating cash flow and cap-ex was at its tightest in Q2 2016 compared to any other period over the last three years, external cash in some form was still required.

Of course, cap-ex is not the only cash outflow that oil and gas companies have seen piling up in recent times. However, it is encouraging that the majority of the 68 companies, despite their varying financing gaps, were actually able to cover all cash outgoings in Q2 2016 with a combination of operating cash flow and external cash sources – and many of the companies have a successful share issuance to thank. 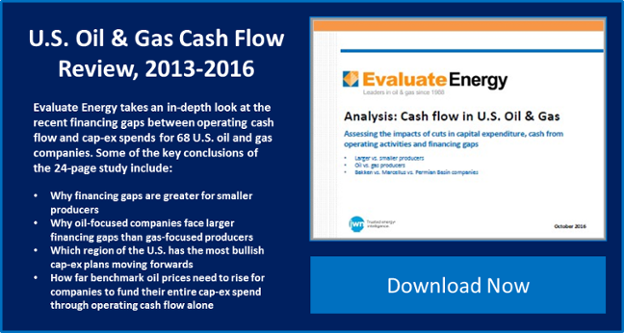