Since agreeing the largest single upstream-centric deal of the past 10 years to purchase BG Group back in April 2015, Royal Dutch Shell has been selling assets all over the world to rationalize its portfolio.

Including this week’s US$750 million sale of an offshore shallow water gas field in Thailand, the company has now agreed sales of assets and business units for a grand total of just under US$27 billion between April 8, 2015 – the day the BG deal was first announced – and January 31, 2018.

According to data available in Evaluate Energy’s M&A database, Shell has been involved in 48 separate asset sales since the BG announcement, five of which were agreed for a value of over US$1 billion. From the Canadian oilsands to pipelines in the U.S. and chemical businesses in Saudi Arabia, the company’s sales have taken place all over the world and in a variety of business segments.

In terms of deal value, at US$9.4 billion it was Canada that saw the highest amount accumulated in asset or business unit sales by Shell since April 2015. The majority of this value revolves around the US$8.3 billion sale of a 60% stake in the Athabasca Oil Sands Project to Canadian Natural Resources in March last year. This is still the largest individual sale that Shell has made since acquiring BG.

The United States, where 11 Shell sales took place, saw the highest number of individual deals agreed, ahead of the UK with eight and Canada with five.

This US$27 billion is also probably just the tip of the iceberg; of the 48 individual divestitures Shell has agreed to since April 2015, the acquisition cost for 19 of them remained confidential. A number of these involved the kinds of assets that would normally change hands for sizeable sums, including the sale of stakes in an Iraqi oil field, a Chinese lubricants business and a Malaysian LNG export facility.

For more on Shell’s asset divestments and indeed any acquisitions made over the past 10 years, request a demonstration of Evaluate Energy’s M&A database at this link. 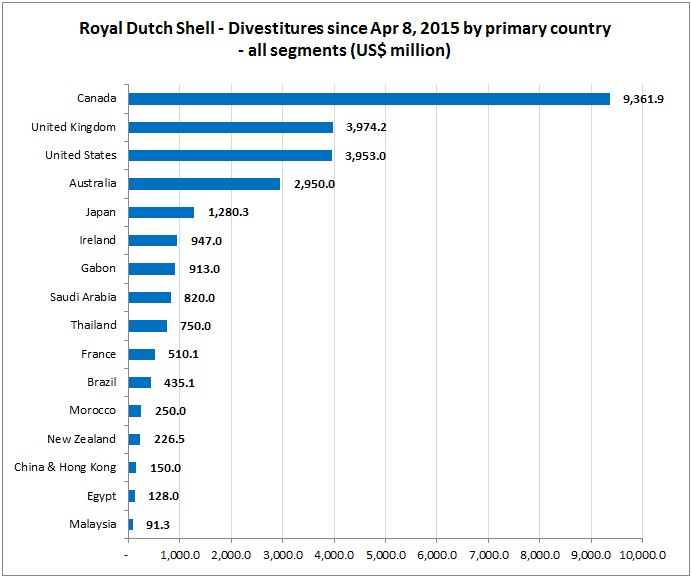 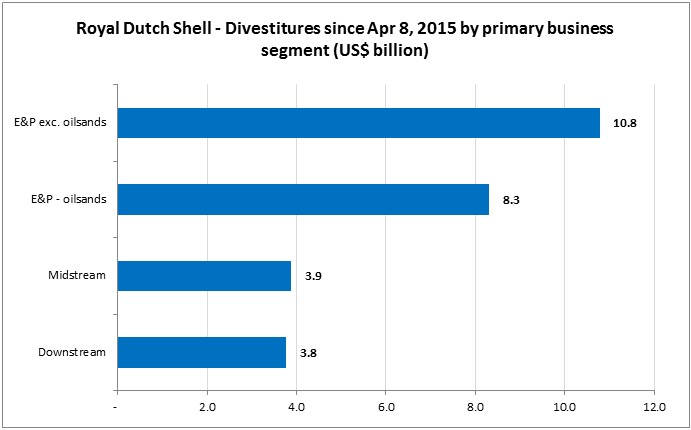 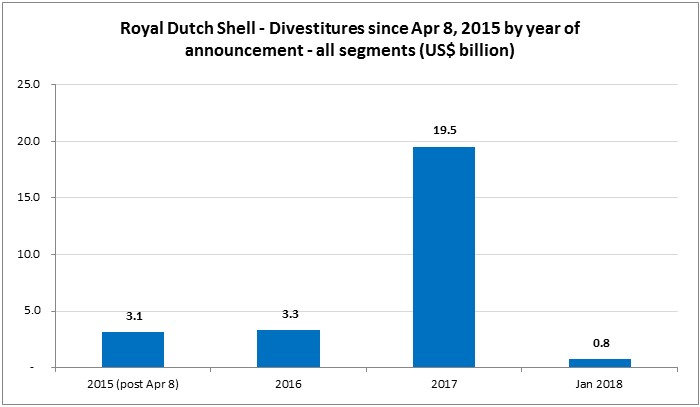 1) In deals with multiple countries or segments involved, a deal was assigned to a country and a business segment according to where the majority of the value was estimated to reside.
2) Deals were assigned to a time period based on the deal announcement date.
3) Deals in the midstream segment include deals for LNG, pipelines, storage, terminal assets and processing facilities. Deals in the downstream segment include deals for refineries, service stations, chemical production facilities and oil product marketing assets.