PDC Energy Inc.’s $1.7 billion acquisition of SRC Energy Inc. was the single-most ‘transformational’ deal last year for any oil, liquids or oilsands portfolio in North America, based on new data from Evaluate Energy. 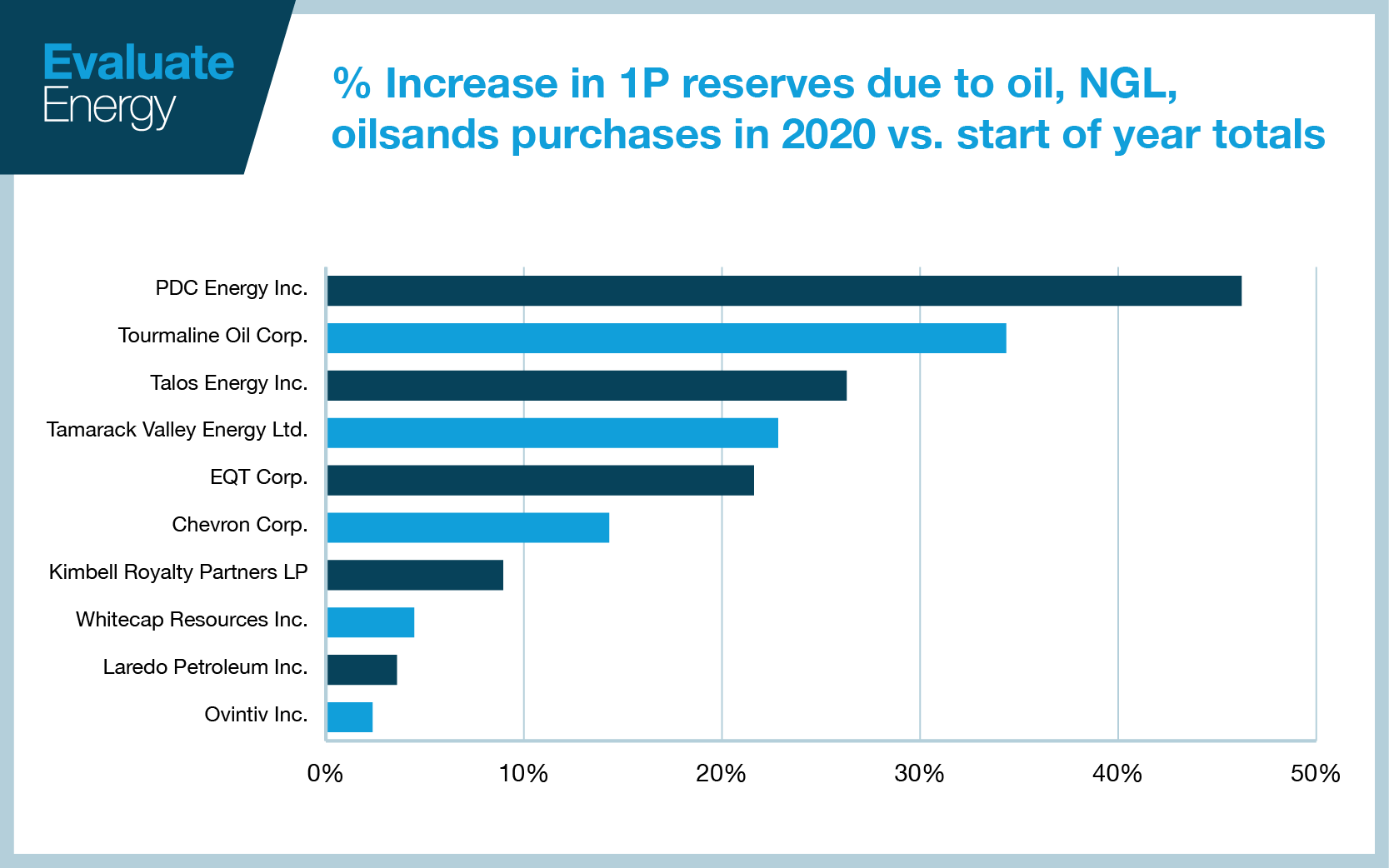 Evaluate Energy identified the 10 most transformed oil portfolios of 2020 by comparing the volume of barrels of proved (1P) oil, NGL and oilsands reserves added by each company via acquisition in the U.S. and Canada according to year-end reserve reports with North American reserve totals at the start of the year (1).

Data on the companies with the 10 most transformed portfolios in North America can be downloaded for free here.

The PDC acquisition of SRC, originally announced in August 2019 and focused on assets in the Wattenberg core area of the DJ Basin in Colorado, completed in January 2020. It boosted PDC’s oil and liquids portfolio by 162 million barrels of 1P reserves according to its latest reserve report. This represents an increase of 46% compared to the 351 million barrels of 1P oil and NGL reserves it had going into 2020 (1).

“Quite rightly, the large value mergers we’ve seen recently across North America have earned much of the industry’s focus for analysis in the M&A space in recent months, but the data here shows that a large dollar value isn’t the only indicator of a transformative acquisition,” said Eoin Coyne, Senior M&A Analyst at Evaluate Energy.

“By taking out the dollar values and focusing solely on the impact on oil and liquids reserves bases, we can see transformation occurred at all levels of the U.S. and Canadian oil industry in 2020, for majors and much smaller producers alike.”

Coyne points to Chevron and Canada’s Tamarack Valley as a good example.

“The two companies were separated by 2.9 billion barrels in proved U.S. and Canadian oil reserves at the start of 2020 and their respective M&A activity last year was also worlds apart in size; Chevron acquired Noble Energy for $13 billion in the biggest upstream deal of 2020 and Tamarack Valley added just 9 million barrels to its oil reserve base through acquisitions,” he said. “But the data here proves that Tamarack Valley’s activity was far more transformational for the company itself, relatively speaking. The company’s reserves grew by 23% looking at acquisitions alone; Chevron’s grew by 14%.” (1)

The top 10 companies that saw their oil, liquids and oilsands portfolios boosted to the greatest extent through 2020 acquisitions can be downloaded in excel format here.

Evaluate Energy’s review of 2020 M&A activity in the upstream industry can be found here. The report includes mergers and acquisitions announced across North America that were not completed by year-end and therefore did not impact corporate reserve levels in time for this analysis.