Despite cuts in capital investment during the price downturn, a new EY study based on Evaluate Energy data shows that the 50 largest U.S. oil and gas companies (see note 1) were able to maintain record levels of output.

The new EY U.S. oil and gas reserves and production study is available to download here.

Capital investment fell during the 2015-2016 down cycle, and reserve additions fell almost in lockstep. In 2017, reserve additions increased dramatically, with an improved price environment. The report said capital expenditure levels far below the 2014 spending peak were “sufficient to maintain production at near-record levels.” 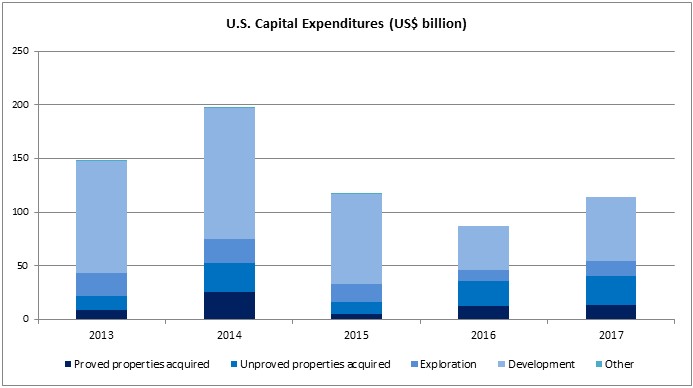 Source: Chart created using data published for 50 U.S. oil and gas companies in EY’s US oil and gas reserves and production study for 2018.

Sustaining the surge were dramatic improvements in cost efficiency: between 2014 and 2017, the amount of capital dollars required to add a barrel of reserves fell by more than half, from US$16.79/boe to US$6.62/boe for the study group.

Evaluate Energy holds operating cost and capital spending data for every U.S. E&P company, as well as for hundreds of significant oil and gas producers around the world. For a demo of Evaluate Energy, click here.

1) The 50 companies are the 50 largest in the U.S. based on 2017 end-of-year oil and gas reserve estimates. The study companies cover approximately 44% of the U.S. combined oil and gas production for 2017.