Analysis in CanOils’ newest report “Upstream M&A in Canada Falls Away at Beginning of 2016” shows that the Canadian oil and gas upstream sector only saw Cdn$1.7 billion worth of M&A transactions in December 2015 and January 2016 combined. While this value is low, the two months did see their fair share of intriguing and significant deals, all of which are covered in detail in the report. The report is available for download now.

The biggest story of December and January was undoubtedly Suncor and Canadian Oil Sands finally reaching a merger agreement that everybody was happy with. The largest single new deal announced in the two-month period was a Cdn$770 million deal that will see Long Run Exploration Ltd. acquired by a group of Chinese investors. Long Run had only begun a process to sell 80% of its production portfolio a month earlier, so this deal to suddenly sell off the entire company was somewhat surprising. In the period’s second biggest deal, Murphy Oil and Athabasca Oil Corporation entered into a joint venture focused on the Duvernay and Montney shale in Alberta, while Husky Energy Inc. engaged multiple brokers to help sell off around 62,000 boe/d of production. 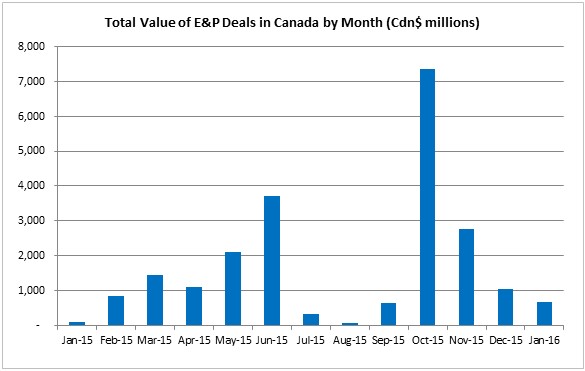 This combined value of Cdn$1.7 billion for December and January is a 39% drop on November, when the final total reached Cdn$2.8 billion in that month alone. However, the lack of a +Cdn$1billion deal in December and January was the main factor here. November saw a Cdn$1.8 billion deal between Canadian Natural Resources Ltd. and PrairieSky Royalty Ltd., while Suncor Energy Inc.’s Cdn$6.6 billion offer for Canadian Oil Sands Ltd. was first made public in October. Both of these deals bolstered their respective monthly deal totals significantly.

* Tourmaline Oil Corp. was not officially announced as the acquirer for Enerplus’ assets. Enerplus stated that it was selling its assets in two deals for Cdn$193 million. Tourmaline later said it had bought assets in the same areas for Cdn$183 million and are assumed to be the acquirer for one of Enerplus’ two dispositions. Enerplus itself confirmed the closing of a Cdn$183 million deal a day later.