Analysis in CanOils’ latest monthly M&A review suggests that the pressure on Canada’s E&P sector to raise external financing to meet capital commitments would appear to be alleviating somewhat, based upon much lower M&A activity levels in September.

A more secure footing for oil prices, coupled with asset portfolios that are now generally better equipped to see out the price downturn, are the main factors we think contributed to this reduced deal flow.

This month, the value of announced M&A deals in the Canadian E&P sector totalled Cdn$165 million, according to our latest CanOils monthly report, which can be downloaded here. This value stands significantly below the Cdn$1.1 billion monthly average in 2016 to date, and considerably below the Cdn$2.2 billion monthly deal value in Canada since the price downturn. 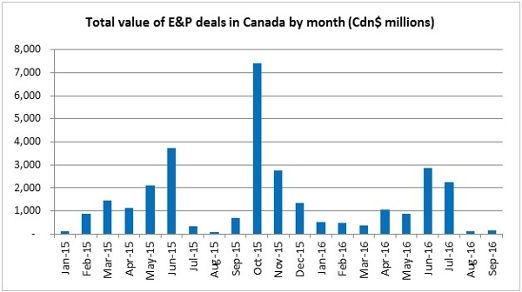 Despite the low activity, interesting trends continue to stand out, most notably activity related to Canada’s private oil and gas companies. InPlay Oil Corp. was the headline maker this month, agreeing two deals with TSX-listed companies aimed at creating a Pembina-Cardium focused producer in west central Alberta. These deals are featured heavily in this month’s report, along with the completed deals to take both Bankers Petroleum Ltd. and Yoho Resources Inc. into private hands.

For more on these private junior companies, as well as analysis on every deal story impacting the Canadian E&P sector in September, download the report here. 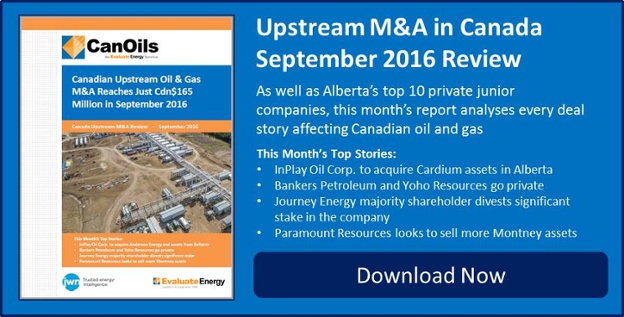