The value of December’s announced M&A deals in the Canadian E&P sector totalled just over Cdn$1.2 billion – a sum around $300 million down on the equivalent totals in November and October, but still above the 2016 average of around Cdn$1 billion.

This is according to data available in CanOils latest monthly M&A review, which is available for download now.

This month, much in the same way that 2016 began, it was oilsands assets making the biggest domestic M&A headlines. Norway’s Statoil ASA (Oslo:STL) has decided to withdraw from the Kai Kos Denseh project and has agreed a deal with Athabasca Oil Corp. (TSX:ATH), while PrairieSky Royalty Ltd. (TSX:PSK) has acquired a 4% gross overriding royalty at a Pengrowth Energy Corp. (TSX:PGF) SAGD project.

At the start of the year, it was Suncor Energy Inc. (TSX:SU) and its takeover of Canadian Oil Sands Ltd. making all the headlines, along with other oilsands acquisitions from Murphy Oil Corp. (NYSE:MUR) and France’s Total (Paris:FP).

Statoil’s sale is one of multiple deals agreed in 2016 that saw a non-Canadian company sell Canadian assets. Details on the other major asset sales involving foreign investors are also included in the report.

Click here for the full report, including a rundown of every M&A story affecting a Canadian oil and gas company in Canada and around the world in December 2016, as well as detailed metrics for the most significant deals. 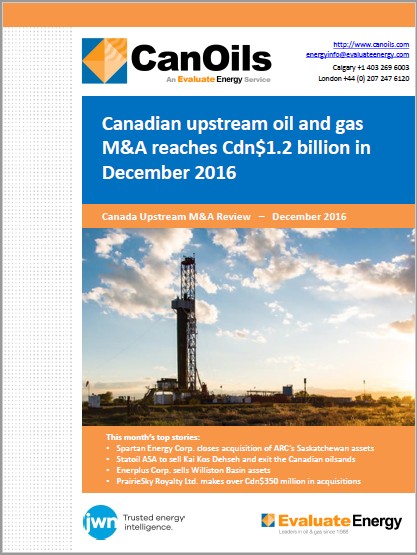