Since commodity prices began to drastically fall in Q4 2014, U.S. oil and gas companies in the upstream sector have seen their respective net incomes drop significantly. Operating margins have been tightly squeezed and assets have suffered major impairments. The low price environment has endured throughout 2015 and, as a result, Q3 2015 earnings for U.S. companies are the lowest since prices began to fall in Q4 2014.

Evaluate Energy has analysed the preliminary Q3 earnings statements of 48 U.S. companies and compared it with their earnings in previous periods. The 48 companies had a combined total net loss of US$25.5 billion, which is a staggering 70% and 58% larger than these companies’ significant combined net losses of US$14.9 billion and US$16.6 billion in Q1 and Q2 2015 respectively (see note 1). 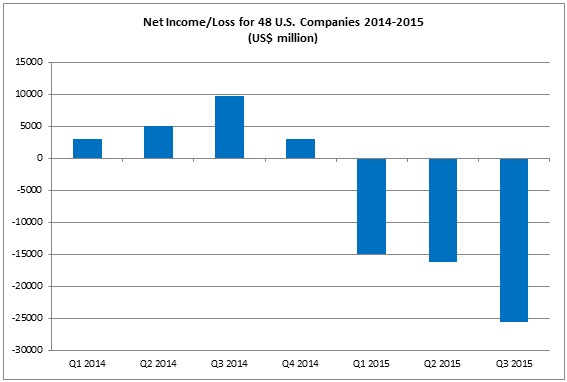 Impairments (see note 2) are clearly the main reason for this continued downward trend. Evaluate Energy released a similar piece of analysis earlier this year focused on U.S. company impairments in Q4 2014. In Q3 2015, impairments for U.S. companies have not only continued to be recorded due to low prices, they are in fact significantly larger.

Of the 48 companies in this study, only 10 did not report any kind of impairment in their earnings statements, while the remaining 38 collectively reported impairments totalling US$32.8 billion in Q3 2015. This is a 79% increase over last quarter’s combined impairments of US$18.4 billion for the full group of 48 companies. In total, since prices began to drop in Q4 2014, the 48 companies have recorded a grand total of US$84.6 billion in impairments and Q3 2015’s total makes up 39% of this. 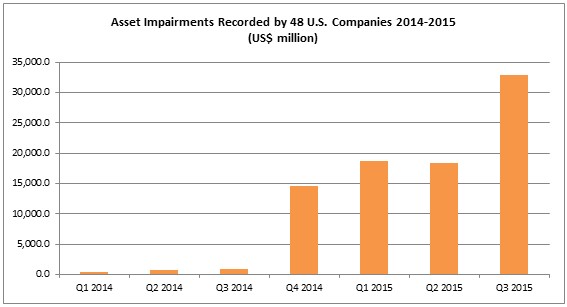 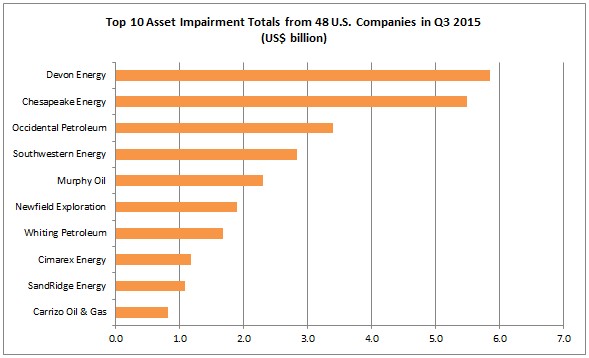 All data in this report was pulled together using the Evaluate Energy database, which provides clients with efficient data solutions for oil and gas company analysis. This includes over 25 years of financial and operating data for the world’s biggest and most significant oil and gas companies, M&A deals, a global E&P assets and LNG database, and an emerging product that focuses on the North American shale industry.

1) Net income/Loss here refers to post-tax net earnings on the 48 companies’ income statements; the figures have not been adjusted for non-recurring items such as impairments, gains or losses on asset sales or unrealised gains or losses on hedging contracts.

3) The 48 companies were chosen as they had all reported preliminary results by the morning of November 5, 2015 (UK time).