Higher commodity prices in Canada are driving a renewed focus on completing wells in Alberta, following a huge increase in the number of drilled but uncompleted wells (DUCs) over the past three years.

The chart below shows where it is most expensive to complete a horizontal or directional well for six PSAC regions in Canada. To simplify our findings, each well type within each region has been grouped into high, medium and low completion cost brackets. Dollar amounts and a breakdown of every completion cost component are available in the study itself. Click here for more details. 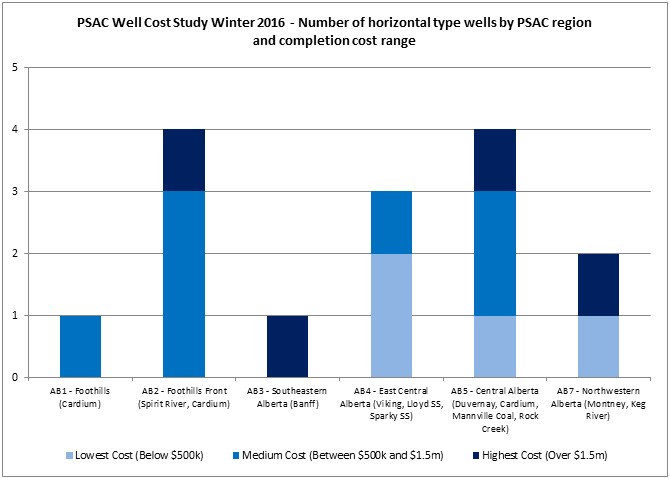 Source: PSAC Well Cost Study, Winter 2016 – Find out more here. (Alongside each PSAC region in the chart, the target formations of the type wells within the region are listed. These are listed in order from highest completion cost to lowest completion cost.)

During the downturn, DUCs became more abundant across Alberta for a number of reasons.

Many operators were eager to delay the most prolific production period of any well – the first few months – until market pricing offered greater reward. The aftermath of that strategy is playing out now. PSAC’s latest completion cost data can help to predict just how much this patience will pay off for each applicable operator, in terms of margins they can now expect to receive at higher prices.

Other key reasons for keeping high numbers of DUCs include delaying production to boost the size of a company’s non-producing reserves at opportune times. That tactic is used to bolster the attractiveness of an asset to investors or acquirers. Naturally, leaving wells as DUCs may have been the only option for other companies that had simply run out of cash.

Of the six PSAC regions in the above chart, Foothills Front is clearly one of the highest completion cost areas for horizontal wells. “These wells in Foothills Front often target the prolific Cardium formation, which is characterized by highly complex structural uncertainty and thin productive zones separated by thick shales that complicate directional drilling and completion exercises,” said Karl Norrena, Manager, New Product Development at JWN Energy.

At the end of 2016, on top of the fact that it has some of the highest well completion costs in Alberta, Foothills Front also had the greatest number – 320 – of horizontal/directional DUCs that were drilled since September 20141, when the price downturn began, according to the latest data from CanOils Assets. 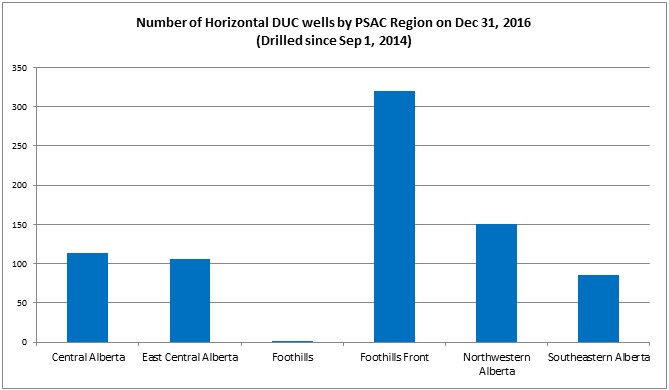 1) The final drilling date of every well included in the chart was on or after September 1, 2014