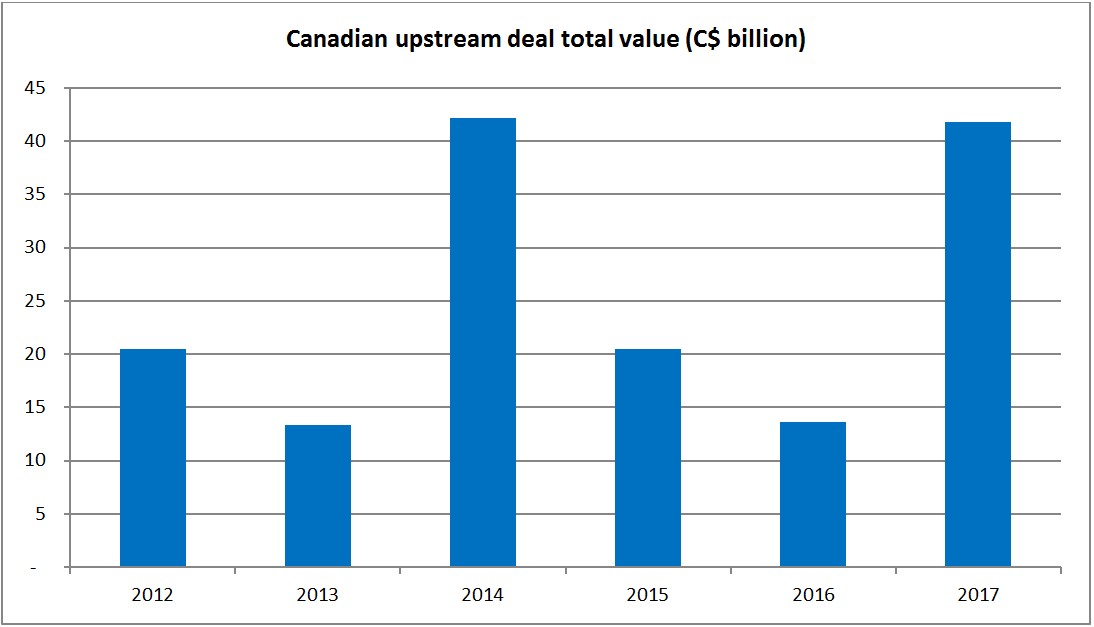 Source: CanOils M&A Database – deals are assigned to a year based on their announcement date.

2017 saw $32 billion in spent in three major oilsands deals, which comprised more than three-quarters of the year’s outlay for Canadian upstream assets.

“While 2017 saw the largest spend for a full calendar year since 2014, it’s hard to ignore the fact that a handful of oilsands acquisitions are far and away the key drivers here,” said Chris Wilson, Managing Director at CanOils. “Ignoring deal values, we saw that the number of Canadian upstream deals agreed, excluding land sales, was down by 20 in 2017 from 162 last year.”

The year ended quietly – with just C$117 million in new deals agreed in December according to data available in CanOils’ latest M&A report. There are reasons for optimism, however, heading into 2018.

“2017 was a relatively stable year for the oil price and in general M&A markets around the world have responded positively,” said Wilson.

“After the price downturn, the Canadian upstream sector is populated by companies that are typically much leaner now in terms of production costs and also much more stable in terms of balance sheets. This all seems to suggest that it will not be too long before we see a greater volume of deals being agreed for Canadian assets once again.”

A full rundown of 2017’s largest deals in Canada is available free in a new CanOils report focused on December activity. Click here to access it.