Europe will play a pivotal role in the performance of LNG markets globally amid ongoing concerns over gas over-supply, reduced demand in some quarters and pressure on prices.

Qatar remains the largest supplier of LNG to Europe, with a 56% market share, followed by Algeria and Nigeria. While the direct impact of U.S. LNG has not been significant in Europe, it is putting downward pressure on prices. “There is a lot of gas in the market, and the market is fairly flat in Asia,” Zsigri said at the LNGgc Conference in London this week.

LNG import capacities are set to increase dramatically in several European countries by 2025, notably in the United Kingdom, France, Ukraine, Poland, Greece and Croatia, according to Evaluate Energy data. 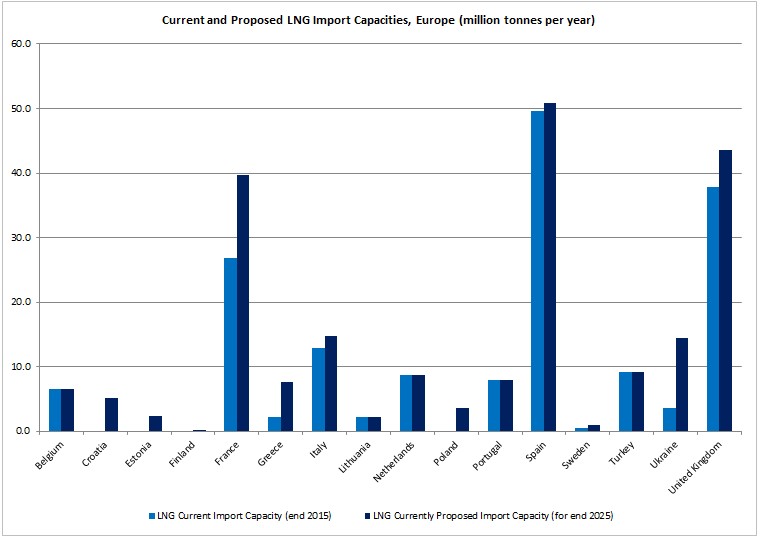 Costanza Jacazio, a senior gas analyst at the International Energy Authority, expects demand to stabilize in Europe followed by a gradual recovery due in part to retiring coal and nuclear plants. But she said the global rebalancing of markets would depend on the pace of expansion in China, together with other developing Asian nations.

“Japan and Korea will play a much less important role in absorbing new LNG production coming onto the market [in the next five years],” she said. “This means the rest of the world needs to take this incremental LNG.”

Carmen Lopez-Contreras, a senior analyst on Repsol’s gas and power team, said declining European power production (for example in the United Kingdom and the Netherlands) and the need to retain gas supplies while countries adopt more renewable energy solutions will bolster gas demand.

“We have a lot of new volumes coming on-stream,” she said. “Demand has not coped with our expectations. Traditional buyers [like Japan and Korea] have not demanded as much LNG as we are used to. They have turned to coal, which is cheaper. Right now we are at the very bottom of gas prices, but this is incentivizing demand.”

Pricing, volume and destination flexibility will be high on the agenda for buyers facing greater uncertainty and volatility in demand.

She believes the United States is on track to take the role of swing supplier, adding that the trajectory of global gas markets, and the pace of any market rebalancing, will rest strongly on demand in China and developing Asian nations. She sees this flexible LNG going to new importers in South East Asia, South Asia, North Africa and Latin America. She feels the rise of renewables and increased energy efficiency will temper additional European demand.

1) Proposed import capacity for end 2025 is calculated assuming that all currently active import terminals remain in operation and all proposed projects, regardless of current status, reach completion at their respectively scheduled onstream dates.