If I had to lay odds on which E&P powerhouse is going to secure the sector’s next major corporate acquisition I’d start by examining their ability to absorb substantial levels of debt while still keeping debt-to-capital ratios in balance.

Sightings of large corporate mergers have been rare during the commodity price downturn. During that time, the number of companies with high debt-to-capital ratios has soared. To help understand which oil giants have the financial clout to pull together a major M&A deal, we’ve shortlisted those with the greatest ability to assume debt and remain “healthy”.

For More: JWN Webinar Series – Review of Recent Transactions: Where is Money Being Spent and Why

Companies with greatest debt capacity as of Q1 2016

By assigning an arbitrary debt-to-capital ratio of 35% as “healthy” you can see which companies are currently able to assume the most extra net debt for a corporate acquisition either in Canada or internationally, and still keep debt levels in check. For example, Tourmaline Oil Corp. (TSX:TOU) would be able to assume Cdn$799 million extra net debt in any acquisition in this model, based on its Q1 2016 balance sheet, before its debt-to-capital ratio exceeded 35%.

Of course, this doesn’t necessarily mean these companies will seek a merger deal. But if they do, they’ll have plenty of capacity for additional debt assumption.

More details on this can be found in the webinar I delivered last week, which can be viewed here.

Why is debt important to consider NOW?

It’s true that the general capital profile of an upstream oil and gas company has, on the whole, changed dramatically since the price downturn began. Looking at U.S. and international companies that report to the SEC as well as every TSX company, we can see a general increase in risk since last year by looking at those debt-to-capital ratios. The findings are intriguing: 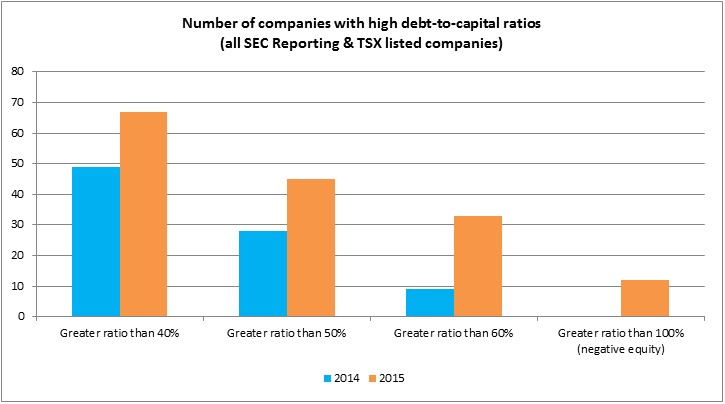 Source: JWN Webinar Series – Review of Recent Transactions: Where is Money Being Spent and Why

In 2015, debt was a much greater proportion of their entire capital structure than 2014. That’s hardly a major surprise given the downturn. Some companies even moved into a negative equity position in 2015, as pressures from a longer period of low commodity prices mounted.

The highest profile global corporate merger during the downturn was undoubtedly Royal Dutch Shell’s (LSE:RDSA) acquisition of BG Group for around US$81 billion. In Canada, it was Suncor Energy’s (TSX:SU) Cdn$6.6 billion acquisition of Canadian Oil Sands Ltd. (COS) to become the largest stakeholder in the Syncrude project.

Both deals had a lot in common: a large issuance of stock in the acquiring company to the target, as well as the assumption of significant debt.

June 2016 has also seen a couple more deals in Canada that follow this debt assumption pattern.

It’s this ability to assume debt and still remain healthy that we think is crucial in identifying those most likely to take on a big corporate merger in the near future.

Both Suncor and Royal Dutch Shell appear in our above list of companies with high debt capacity. Suncor has been linked to more acquisition activity in press reports, while Shell has not – having actually been linked with more asset sales than purchases. In fact, rumours came out of the company that Shell assets were going to hit the market in ten countries worldwide in the not-too-distant future.

Of the other companies listed with greatest debt capacity, many have been selling high-value royalty assets in Canada to bolster their activities with significant cash through the downturn, while the international list includes some of the world’s biggest and most powerful companies.

With companies also having put copious funding into cost controls in recent times and oil prices starting to trend upwards a bit, we might just be around the corner from one of the companies on this list making the world’s next big corporate merger in the E&P sector and we should expect it to include the significant assumption of debt. 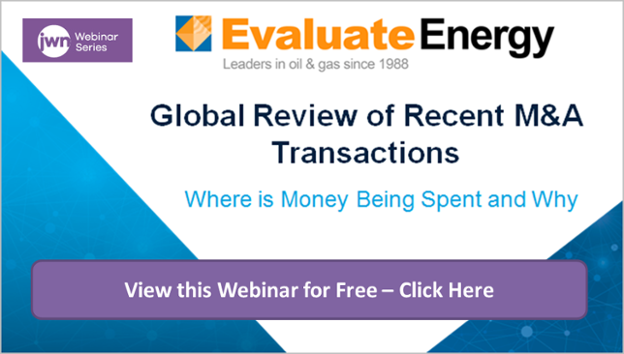 1) To value all acquisitions where stock is used as part of the consideration, Evaluate Energy and CanOils always use the day prior share price. Sometimes companies use a deemed stock value or a weighted average price in their press announcements to value the stock, but for comparability reasons, we always use the same method for every deal. This may create some slight discrepancies between our data and announced deal values. Gear valued its acquisition of Striker based on its concurrent bought deal financing, rather than its trading share price, and reported a value of Cdn$63.7 million.